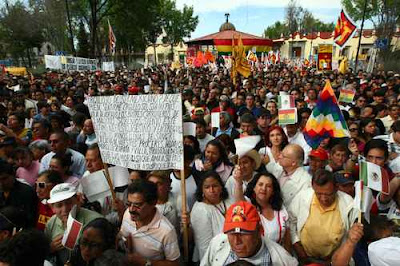 It was a hot afternoon in central Coyoacán and the sun beat down heavily on the crowd as they awaited the appearance of charismatic Bolivian leader, Evo Morales. The public queued patiently and edged slowly into the Jardín Hidalgo, following mandatory security checks that are the norm at events of this nature. As the area filled, the more eager of the spectators began to climb onto the bandstand, trees and fences, to get a glimpse of their hero. The smaller members of the audience stood on their tiptoes in preparation for the Bolivian leader’s arrival. A scuffle broke out in the crowd, and the two perpetrators were comically berated by onlookers who reminded them that, “We are socialists, not neocons! Keep the peace.” To warm up the crowd, an M.C. read out some of Evo’s achievements since he began his presidency in 2006. Evo Morales has made Bolivia a literate nation. In 2008, during the financial crisis, Bolivia’s GDP increased by 6%. Evo has successfully nationalized the nation’s gas reserves. He also intermittently entered the stage to give updates on Evo’s whereabouts. “He’s leaving the airport now!” Cheers from the crowd. “His car’s just arrived!” Cheers again. “He’s making his way through the crowd! Yet more cheers.

The crowd erupted as Morales took to the stage and began his speech. He greeted the crowd in Spanish and then in his native indigenous tongue. He expressed surprise at the size of the crowd, commenting that he thought he could only pull a crowd that size in Bolivia. He then apologized for not previously visiting Mexico, saying that he had to concentrate on governing his own country and gaining re-election.

Morales then instructed the crowd on how to match his achievements and earn respect for indigenous people. The president said it was important to move from mere resistance to the taking of power. The first step involves a “fight against all enemies – internal and external.” Step two entails uniting the Left – communists, socialists, etc. – under one banner. The third and final step involves self-belief—believing that you can become a political force.

He then moved on to talk about the Left’s bête noire – the rich. He told the cheering crowd that “basic services are public services and must not be privatized.” The crowd responded by chanting “Calderón out!” recalling their own president’s recent decision to dismiss over 40,000 employees of the state electricity company for the purposes of privatization. Morales’ attack on the upper class continued as he told the crowd that, “There are more of us than these modern millionaires. They have all the wealth but are small in number, whereas we are poor but are the majority.” He told the crowd that these gold-diggers were only interested in exploiting natural resources for their personal financial gain. The crowd listened as Morales spoke of the importance of getting middle-class citizens and intellectuals on side, to fight the oligarchs. Morales spoke of how he had no fear when he nationalized Bolivia’s resources, and he applauded the armed forces for their support during this time. Despite the fear-mongering of many international economists, the president’s policy was vindicated when Bolivia had it first fiscal surplus since 1940.

Morales then spoke of the weight of responsibility that he felt upon becoming president. He told the crowd of the difficulties of being the first indigenous president, candidly revealing that, “I was scared.” Nevertheless, Morales overcame his fear and turned his country from a “wretched and impoverished” nation to a modern state admired by many.

The president then turned his attention to the U.S. He lambasted the U.S. government for its role in the Honduran coup, calling it an “open conspiracy” and chastising the country for failing to end the debacle and reinstate Zelaya. He reminded his audience that there was “a permanent fight against imperialist intervention.” He recounted a story from early in his career, when he was a trade union leader in Cochabamba. There was a U.S. military base in his native city, which was used exclusively by the U.S. ambassador. A locally-elected leader made the mistake of trying to use the airport, but was told by U.S. officials that he needed permission. “Now Comrade Lula uses that airport, and so does Comrade Chavez!” he shouted defiantly, as the crowd reacted rapturously.

To end his speech, the president spoke of the dangers facing the world because of climate change. He invited members of alternative social movements to lobby their politicians and attend his alternative summit on climate change, scheduled for April. Morales told Mexicans that it was up to them to change their country and that this week could be historic. The Rio Group summit, which unites all the Latin American and Caribbean nations and takes place this week in Cancun, has been seen by many leaders as an opportunity to break free from U.S. dominance. “And in what better place would this happen than in the land of Benito Juárez and Emiliano Zapato!” Morales proclaimed, name-checking two heroes from Mexican folklore. His final words struck a note of optimism for the crowd, “Soon Mexico will be free.” As the crowd dispersed into the cool Coyoacán night, many hoped that these words foreshadow better times and that Mexico will share the same fortune currently experienced by their Bolivian brothers.

Posted by Laura Carlsen at 6:01 PM