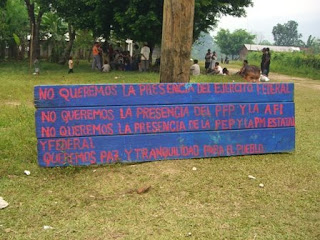 The International Civil Commission for the Observation of Human Rights delivered its Report on Human Rights at a press conference in San Cristobal de la Casas, Chiapas Sunday then presented the report in the Zapatista “Good Government Boards” that govern on a rotating basis in five regions. The report is the result of an intense fact-finding mission carried out from January 30 to February 20 of this year by a volunteer group of 50 people, including this writer, and the sixth visit of the Commission since it began its work following the Acteal massacre on Dec. 22, 1997.

The 484-page report documents serious human rights violations in the states of Chiapas, Oaxaca, and San Salvador Atenco in the State of Mexico. After conducting 275 interviews with over six hundred people--including victims of human rights violations, government officials and human rights groups--the Commission ratifies its conclusion that “the human rights situation in Mexico is extremely critical.” Moreover, it states, the pattern of violation and the lack of response from state and federal governments or the justice system constitutes “an authentic state policy.”

The report calls on the government to conform to international human rights agreements and actively prosecute violators that form part of the government and official security forces. In press conferences in Mexico City and Chiapas, human rights groups praised the report as a major contribution toward ending impunity. However, in its return visit, the Commission noted with concern that since the time of the report, not only has little progress been made on documented cases (with the exception of the release of some political prisoners in Chiapas and Oaxaca), new cases have been reported in Chiapas and Oaxaca.
The five of us charged with presenting the report throughout the state have received documentation regarding military incursions, harassment from paramilitary groups, and arbitrary detentions in Zapatista base communities. Conflicts over land continue to be a common theme throughout the state, as legal structures to recognize post-insurrection occupations have been insufficient in granting clear rights and protections to Zapatista communities and competing groups have spearheaded offensives to gain control of Zapatista territory.
Members of the group also met with Governor Juan Sabines, who announced that the state would purchase the land where the Morelia Caracol is located to defuse a conflict there. The Commission requested a review of the case of 16 political prisoners and visited two prisons where prisoner organizations have staged sit-ins and hunger strikes to protest torture, human rights violations and to call for a review of their cases.

While on the road between indigenous communities, we witnessed the heavy military presence as we passed truckloads of soldiers deployed in the area north of San Cristobal. The report mentions “A major strategy of the current government has been to reinforce the role of the Army in persecuting crimes of drug-trafficking, arms-running and border control. In Chiapas, these reasons have been used to justify its continued and disproportional presence at a time when the armed insurgency has long ceased to be a justification.” In some places, this has led to concrete violations of human rights and in others a source of harassment and intimidation.