First President from the Left Inaugurated in El Salvador 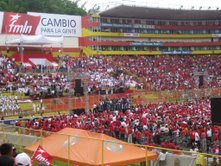 San Salvador´s Cuetzalan Staduim was filled by 2 p.m. yesterday, charged with energy and waiting for the arrival of Mauricio Funes, newly elected president of El Salvador of the Farabundo Martí National Liberation Front (FMLN). Images of Farabundo Marti, the social activist and Communist leader for whom the party was named, and Shafik Handal, the late rebel leader, were prominent among the crowd that was nearly all dressed in red FMLN apparel. 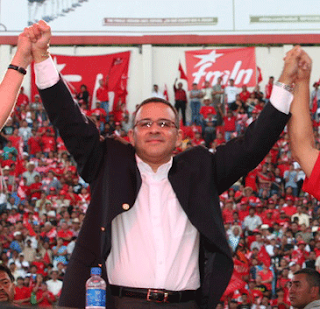 Funes, elected on Mar 15, is the latest in a phenomenon of left leaning governments that have been elected in recent years in several Latin America countries including Venezuela, Bolivia, Nicaragua, Argentina, Honduras, Guatemala, Ecuador and Brazil. "The Salvadoran public asked for a change, and that change begins now," declared Funes in his inauguration speech.

Saul Mancia, a student who worked on the Funes campaign, was celebrating, but also expressed caution in what to expect from the new administration.

“For me, the changes aren`t going to be huge, they are going to be adjustments to the model. Salvadoran society isn`t ready for huge changes yet,” he said. “Funes is a transition government. He`s very intelligent. Change will be seen, but within several years. You`re not going to see a Cuba, nor a new Venezuela—it will come in a Salvadoran context.”

After decades of armed conflict that wiped out a generation of young people—some estimates put the number of deaths at 75,000—and forced thousands into exile, it was also an emotional moment for people affected directly by the conflict. Javier, an ex-FLMN combatant, fought back tears while trying to express what the day meant to him. “Obviously I have dreamt about this day for so many years,” he said. “In my dreams it was a bit more radical, but still, we have shown that many, many years later, yes, we could.”

Chants of “Si, Se Pudo!” (Yes, we did!), musical acts from throughout Latin America gi 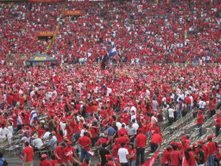 ving tribute to Che Guevara, Fidel Castro and martyred Archbishop Oscar Romero were topped off by speeches by Presidents Rafael Correa of Ecuador, Daniel Ortega of Nicaragua and messages of congratulations sent from Hugo Chavez of Venezuela and Raul Castro of Cuba in front of a crowd that included Secretary of State Hillary Clinton. Normalizing diplomatic relations with Cuba was Funes’ first official act as president, which he called “correcting a longstanding error of El Salvador being the only Central American country without diplomatic relations with our Cuban friends.”

Posted by Laura Carlsen at 3:15 PM