As Arias Proposes Coalition Government, National Front Against the Coup Vows to Keep Up Resistance 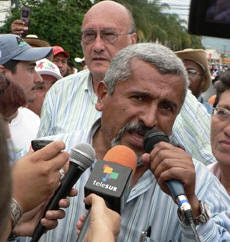 • Hondurans continue blockades of major highways to strangle coup
• Juan Barahona, National Front Against the Coup: “We have no hopes for the talks”
• ‘The U.S. position is a double position: publicly, they are against the coup but there is another position that supports it.’
* U.S. should comply with "complete economic and political isolation" of the Honduran coup

The official mediator of the Honduras conflict, President Oscar Arias, further alienated Honduran anti-coup groups by saying he will propose a coalition government and try to disuade elected President Manuel Zelaya from returning to his country. Arias also mentioned offering “amnesties”, although he did not specify for whom or on what terms. With talks scheduled to begin tomorrow, conflicting statements regarding Zelaya’s return, the terms of talks and the positions coup leaders will take make for an uncertain, and unpromising, scenario.

For leaders of the grassroots movements risking their lives to break the coup’s grip on power in their country, the news comes as proof that the mediation holds little prospect of solutions for reinstating the democratically elected president, ousted by the military on June 28.

The Americas Program talked to Juan Barahona, one of the principal founders and leaders of the National Front Against the Coup, to get his response on Arias’ statements in Costa Rica.

Barahona noted that the coup leaders cannot be considered valid counterparts for negotiating terms for the restitution of constitutional law and return of the president. He also rejected any prospect of imposing a cabinet in Honduras.

“The faculty of appointing a cabinet is a constitutional faculty reserved for the president, President Zelaya. He names the cabinet and a cabinet cannot be imposed or conditioned by anyone else. That is just unacceptable,” he said.

Barahona also discarded a negotiation that would include amnesty for politicians and military personnel behind the coup.

“The other aspect that’s unacceptable is to pardon the coup. They have to pay for their crimes of usurpation of power, violation of the constitution, and the deaths of the past days since the coup.” At least four protesters and opposition leaders have been killed by security forces and hit squads.

The organizations leading the peaceful demonstrations that have mounted over the past week have consistently called for plans to continue to hold a vote on a referendum to call a constitutional assembly, the measure that catalyzed the coup.

“The other thing we can’t give up is our right to hold a constitutional assembly,” said Barahona. “That’s a right we have been fighting for over these past days of actions that we won’t give up.”

The constitutional assembly lies at the heart of the differences between the wealthy oligarchy, backed up by the Armed Forces and the farmer, worker and indigenous organizations that look to change the constitution to guarantee a more just distribution of wealth in the sharply unequal nation.

When asked about the future of the talks, Barahona replied,

A major knot in the talks regards the return of President Zelaya to Honduras. Coup leader Roberto Micheletti has stated that he will not be allowed to return to the country.

According to the latest reports, Zelaya said he will return to Honduras within 48 hours if the talks fail. His foreign minister, Patricia Rodas, told the press that Zelaya will soon be on his way back, in his second attempt to enter the country. "The establishment and installation of an alternative seat of government will be to direct what I will call the final battle."

For Barahona and the Front, Zelaya´s return is non-negotiable.

“We want the president to return to Honduras. If there is no agreement, the presence of the president here will strengthen the resistance and alongside him we can recuperate power that was usurped by the coup.”

In recent statements, the U.S. State Department has reverted to calling for a “return to democratic and constitutional order” without mentioning the reinstatement of Zelaya, although when pushed by the press spokesperson on July 14 Ian Kelly did say that restoration of legal order requires the return of Zelaya. This zig-zagging and the lack of firm actions by the U.S. to apply broader sanctions has caused doubts about the government’s position in Honduras. I asked Barahona about the U.S. position.

“The position of the United States is a double position,” he said. “The public position is that they are against the coup. But there is another very different position that supports the coup.”

“What we expect is for the United States to comply with the agreement of the OAS, which is for the complete economic and political isolation of the coup and they still aren’t doing it.”

Human rights and anti-militarization groups in the U.S. have launched campaigns to call for the reinstatement of Zelaya and return to constitutional rule. Barahona noted that the support received from groups in other countries has been critical to the resistance.

“We really need this support, it strengthens us. With the internal resistance and internacional support we can defeat the people who have carried out this coup.”
Posted by Laura Carlsen at 8:17 PM