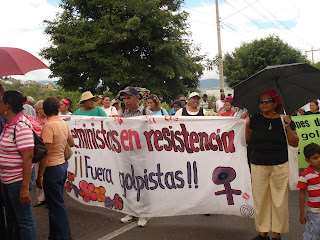 On the morning of June 28, women’s organizations throughout Honduras were preparing to promote a yes vote on the national survey to hold a Constitutional Assembly. Then the phones lines started buzzing.

In this poor Central American nation, feminists have been organizing for years in defense of women’s rights, equality and against violence. When the democratically elected president Manuel Zelaya was forcibly exiled by the armed forces, women from all over the country spontaneously organized to protect themselves and their families and demand a return to democracy. They called the new umbrella organization “Feminists in Resistance.”

On Aug. 18, Feminists in Resistance sat down with women from the international delegation for Women’s Human Rights Week, which they organized to monitor and analyze human rights violations and challenges for the organization. One after another they told their stories in a long session that combined group therapy and political analysis—a natural mix at this critical point in Honduran history and the history of their movement.

Miriam Suazo relates the events of the day of the coup. “On the 28th, women began calling each other, saying ‘what’s happening?’” At first no-one really understood the full extent of the coup, she says, but networks mobilized quickly and women began to gather to share information and plan actions. Independent feminists and feminists from different organizations immediately identified with each other and with the rising resistance to the coup. They began going out to help those who had been beaten and to trace individuals arrested by security forces.

For some, the shock of waking up to a coup d’état wasn’t new.

“This is my third coup,” relates Marielena. “I was girl when the coup in 1963 happened. Then I lived through the coup in 1972. We lived in front of a school and I saw how my mother faced the bullets, we thought they were going to kill her… Later in the university in the 80s I lived through the repression with many of the women here… So this has revived the story of my life.”

There is a saying in Honduras about the Central American dirty war that “While the U.S. had its eye on Nicaragua and its hands in El Salvador, it had its boot on Honduras.” For the older women who remember the terror of that time when over 200 people were disappeared and hundreds tortured and assassinated, the current coup stirs up deep fears. Gilda Rivera, director of the Center for Women’s Rights in Tegucigalpa, says, “I’ve had a messed-up life. I was among the students kidnapped by Billy Joya in the 80s… Now I’ve been to the border twice, I’ve lived with a curfew over my head. Sometimes I wake up alone, terrified.”

The older women agree that they have grown and their movement has grown since the 80s.
Marielena notes, “Today´s not the same as the 80s because there’s a popular movement that the coup leaders never imagined… What Zelaya has done is symbolize the popular discontent accumulated over the years.” She recounts the August 5 battle for the university where she works and the surprising participation of students. Her story is echoed in variations by many of the women present.

Although they battle nightmares and long-buried trauma, these women also see a new hope for the resistance this time around and for their own fight for women´s rights. The repression and fear has strengthened their resolve. “Sure, I’m afraid of dying but I´m not losing hope,” Gilda says. “I see hope in the faces of the people at the marches. And the solidarity from women, from all of you, keeps me going.”

For Jessica, events this year brought to mind the contra war of the 80s. “I never imagined that my daughters would have to be in a situation like this,” she says. As a mother who has lived through the period before Honduras began its incomplete transition to democracy, and the period when democracy was merely a word that belied a much cruder reality in the country, she worries. “I told my daughter not to go to the march. She said, ‘mom, what about my autonomy?’”

“My little girl—she’s 18 now, but she’s still my little girl—ended up going with me to the march. It was really gratifying for me that we went together.” These women know in their bodies and their hearts the costs of resistance. They also know that the costs of not resisting are far greater.

For the new generation of feminists, the catalyst came with the confrontation in front of the National Institute of Women on July 15. The day the coup-appointed head of the Institute was installed, Feminists in Resistance gathered to protest the takeover of “their” institution. Keila says, “The police used their billy clubs, they grabbed me by the neck. I was filled with so much rage—I was drowning in it.” Many women in the organization experienced a turning point in their lives that day. Adelai explains, “(The Institute) was my turf, something that belonged to me, and they attacked us there. That was a direct assault on our condition as women… What they did there really affected me personally.”

Despite a lot of suffering, the women in the Feminists in Resistance meeting agree that the exhausting dynamic of constant mobilizations and repression has deepened their commitment. Their movement has also come together and developed closer ties to the general movement. When word got out that the feminists were being attacked at the Women’s Institute, demonstrators from the entire demonstration of the National Front against the Coup immediately marched to the Institute to defend the women and show their solidarity.

Although the Front leadership continues to be mostly male, men in the movement have publicly recognized the contributions of the feminist organizations and women in the resistance. From tracking the wounded and detained, to marching day after day, to developing analysis and strategy papers, women’s organizations have played a critical role in opposing the coup.

At a meeting between leaders of the Front and Feminists in Resistance earlier in the day, Salvador Zuniga, a leader of the Civic Council of Popular and Indigenous Organizations of Honduras (COPINH) and the Front, recognized that women have been among the most active and courageous in the resistance movement. He pointed out that the feminist movement is at the center of the rightwing reaction that led to the coup.

“One of the things that provoked the coup d’état was that the president accepted a petition from the feminist movement regarding the day-after pill. Opus Dei mobilized, the fundamentalist evangelical churches mobilized, along with all the reactionary groups,” he explained.

The unprecedented role of women in the nation’s fight for democracy opens them up as a target for repression. Zuniga concluded in no uncertain terms, “What I can say is that the feminist compañeras are in greater danger than any other organization. This has to be made public.” His conclusion is based on the forces now in control of the Women´s Institute.

Besides being at the receiving end of the billy clubs and pistols along with the rest of the movement, women suffer specific forms of repression and violence; their bodies have become part of the battleground. Human rights groups including the Women’s Human Rights Week international delegation have documented rapes, beatings, sexual harassment and discriminatory insults. Army and police units routinely shout out “whores!”, “Go find a husband!”, "Go home where you belong!" at the more and more frequent confrontations between the women and the coup security forces.

It’s precisely that step out of the private sphere that makes these dangerous times so exciting and energizes the women of the organization. Many report being driven by the adrenaline of knowing that this time they are the ones defining their history. They ride a roller coaster of emotions, often pitching from euphoria to despair in a single day. But one constant is the satisfaction of binding in a political project with other women who understand the full scope of what they demand and share the contradictory feelings storming inside.

The budding movement that has come together in the heat of the coup as Feminists in Resistance faces some major challenges, the first to defeat the coup that now enters Day 54 on the resistance calendar. As the rightwing consolidates power and its own perverse brand of institutionalism, they feel like they´re looking down the barrel of a gun as far as their rights and safety are concerned. Rumors circulate that the coup will dismantle the Institute for Women. Congress is about to initiate obligatory military service, meaning that mothers throughout the country will be compelled to protect their children from forced induction. Their freedom of expression, freedom of transit, freedom of assembly have all been curtailed under the coup, along with everyone else who opposes the regime, except for them the physical enforcement of reduced liberties is accompanied by acts of sexual violence and threats.

Big questions are on the table at the meeting of Honduran and international feminists. How to fight for a necessary return to institutional order at a time when the vulnerability and insufficient nature of those institutions has been exposed? How to avoid relegating women´s demands to a lower plane in a period of acute political crisis? How to break through a media black-out that´s even more impenetrable if you´re against the coup and a woman? And how to simply hold your work and family together while spending hours a day in the streets and meetings.

Bertha Cáceres is a leader of COPINH, a leader of the Front, and mother of four. In her political work she has integrated her specific demands as a woman and believes that organized women must be front-and-center in the resistance against the coup.

“First, because (our struggle as women) means confronting a dictatorship based on different forms of domination. We´ve said that it´s not just destructive capitalism, not just the racism that has also been strengthened by this dictatorship, but also patriarchy. So we think our resistance as women means going a step further, toward a more strategic vision, a more long-term vision in fighting for our country.”

She points to a national constitutional assembly as a fundamental goal for women. “For the first time we would be able to establish a precedent for the emancipation of women, to begin to break these forms of domination. The current constitution never mentions women, not once, so to establish our human rights, our reproductive, sexual, political, social and economic rights as women would be to really confront this system of domination.”

The women of Feminists in Resistance have no illusions that this will be an easy task. In addition to the challenges above, the movement is in transition to a new stage of nationwide local organization and long-term strategizing, at the same time as it faces increasing repression and human rights violations. The question of the elections slated for November has created another deadline for definitions of Sept. 1, when President Zelaya has sworn to return to the country and campaigns would normally begin. Feminists in Resistance has a clear position to boycott any coup-sponsored elections, but some other parts of the movement and the international diplomatic community have been more ambiguous.

What´s certain amid these rapidly changing national scenarios is that Honduran women have built a movement that, despite little media attention and the barriers of a male-dominated society, has garnered international support from women around the world and respect from the general resistance movement. Their organization will continue to play a central role in what happens next in Honduras—a key determinant of the course of democracy throughout the Hemisphere.

Laura Carlsen is Director of the Americas Program. She is currently in Tegucigalpa as a member of the international delegation of Women's Human Rights Week in Honduras.
Posted by Laura Carlsen at 9:01 AM