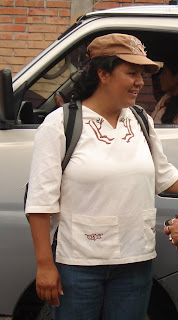 Interview with Bertha Cáceres, COPINH (Civic Council of Popular and Indigenous Organization of Honduras) and the National Front Against the Coup d’état.

How are the women participating in the movement?

Even in spaces that are known as progressive, for women it continues to be hard because we are confronted with patriarchal domination and domestication, and the organizations within the movement are no exception.