Honduran Coup Squeezed From Above and Below—But is it Enough to Restore Democracy? 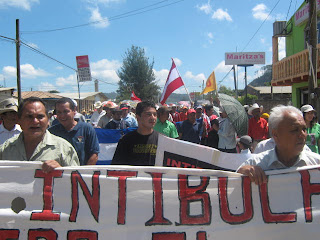 The political crawl space that Honduran coup leaders packed themselves into on June 28 would appear to be running out of air.

A burgeoning grassroots movement from below and continued pressures from the international community above have reduced the space, although the coup-mongers continue to control access to the state apparatus and use the Armed Forces to support their stand-off with the world and the Honduran people. They stubbornly insist that they will run their illegal government, stage their unrecognized elections, spend out the coffers of their impoverished and divided nation—no matter what anybody says or does. From their basement stronghold, the strategy of hunkering down relies on military forces in the streets to fend off challenges and reliable sources of outside supplies. With grassroots challenges growing throughout the country and outside supplies being cut off, the question the world is asking is: how long can this last?

Pressure or Simulation from Above?

Measuring the coup's current air supply is a tricky undertaking. There are few, if any historical precedents. South America's military dictatorships lasted decades, but at a huge human cost in assassinations and repression, without the international opprobrium and sanctions and with support from the U.S. government.

One part of the task at hand is to evaluate the real impact of current sanctions against the Honduran coup. On Sept. 3, the State Department announced the termination of $33 million dollars, including $11 million in Millennium Challenge Funds and approximately $22 in State Department funds. The State Department finally broke down these numbers for reporters in a teleconference: $9.4 million from USAID (including $8.7 million in development assistance and Economic Support Funds and $2.7 million in child survival and health), State Dept. money at $8.96 million ($6.5 million in Foreign Military Financing, $361,000 in International Military Education and Training, and $1.72 million in global peacekeeping operations) and $1.7 in 1206 security assistance. This is added to the $16.5 million in military aid suspended in July.

State Department officials closed the door on determining legally that a military coup took place in Honduras and requiring application of Section 7008 of the Foreign Operations law. They assured reporters that all funds that could be suspended under Section 7008 have now been suspended. This is a highly debatable contention that requires further research.

In any case, the sanctions imposed are dwarfed by the money that continues to go to the illegal regime. The State Department has admitted that $70 million in aid—over twice the amount suspended—will still flow to the coup. Following its meeting, the Millennium Challenge Fund declared on Sept. 9 the formal suspension of the $11 million. But Bill Conroy at Narco News reports that the Millennium Challenge Fund plans to sustain an estimated $100 million in funds to Honduras from now through the end of 2010. Funds that have already been disbursed are not even under review.

Then there are the international financial institutions where the U.S. has a controlling vote. Although the World Bank, Inter-American Development Bank and International Monetary Fund announced in early July a freeze on loans to Honduras, not all disbursements on approved loans are halted. The Americas Program has found that the IDB approved four loans in the four days before the coup—when the press was already reporting an imminent rupture. This was the highest concentration of approvals in recent history and total over $70 million dollars. IDB President Luis Alberto Moreno stated that the bank would not be providing any new credits, meaning disbursements on these loans continue.

Diplomatic sanctions have been equally ambiguous. The refusal to issue the official designation of a military coup is an unjustifiable omission in legal and moral terms, regardless of the sanctions imposed. One reporter asked: "But for the lay person, it’s very hard to understand, I think, why you wouldn't view it as a military coup when the military was clearly so intimately involved in his removal from office and exile." State Department Officials One and Two both eluded the question, stating only that an "important signal" was being sent through the actions. The move has more bark than bite though, since all the aid terminated had already been suspended. Now with the seeming refusal to ever declare the military coup, the State Department has taken a step backwards in opposing the coup and cut Congress out of any process of reviewing all U.S. aid to the coup regime or deciding on when suspensions are lifted.

Sending mixed messages appears to be the official U.S. policy on Honduras these days. The press reported that the U.S. Department of Defense invited the same Honduran Armed Forces that carried out the coup to participate in the regional PANAMAX exercises this week. A flurry of confusion ensued, with SouthCom stating that Honduras will not participate, the Honduran ambassador to Panama stating that Honduras is participating, and a Panamanian spokesperson for the exercises stating that Honduras was invited but will not send warships. Ambassador Juan Alfaro, loyal to President Zelaya, threw more fuel on the fire by adding, What seems odd to me is that military aid was suspended right after the coup and this shows that the Pentagon acts in one way and Obama in another. In another contradiction, School of the Americas Watch reports that the U.S. training facility linked to coup-mongers and torturers continues to train Honduran military personnel.

Some other measures announced by the U.S. government may be more effective in cutting off air supply to the coup than the weak sanctions and contradictory military cut-off. Visas were revoked for coup members, including leader Roberto Micheletti, business supporters and the 14 members of the Supreme Court. Perhaps most significant is the announcement that the U.S. government will not recognize the results of the November elections if they occur under the de facto regime. This announcement, followed by a similar announcement by the OAS, isolates the coup regime in its efforts to stage elections in a militarized country.

However, the U.S. has still not frozen the assets of those responsible for the coup. Questions exist about continued funding through democracy-promotion programs. These measures, or lack of measures, provide a continued air supply to the de facto regime. Support from international rightwing organizations also sustains the Honduran coup, although details of material and training support from these sources are scarce.

As all this goes on, the Honduran National Front Against the Coup is consolidating the movement for a return to constitutional order and a constitutional assembly. It decided to boycott the elections and candidates are being met by angry demonstrations throughout the country.

Through a combination of spontaneous local organizing and an explicit decision from the Front, organizing efforts have spread from the capital city of Tegucigalpa into the departments. A rotating national committee with regional representatives was formed. On the Atlantic coast, the city of La Ceiba has been particularly active. Groups have formed to defend teachers arrested for suspending classes two days a week to participate in the resistance in La Ceiba, El Paraiso and other parts of the country. New women's organizations have also formed to join the resistance to the coup in western Honduras, and poor neighborhoods in Tegucigalpa have created their own organizations to coordinate community actions.

The National Agrarian Institute has been in the hands of anti-coup organizations since June 28 and demonstrations have paralyzed other government institutions for periods of time since the coup. A lively debate exists on how to step up the pressure through these actions while maintaining the commitment to non-violence and avoiding situations that could lead to violent repression and conflict. The defense of human rights is an on-going pillar of the movement, as demonstrators are faced with repression and arbitrary arrests.

The battle to oust the illegal regime is far from over. Grassroots organizations in the United States have mobilized to support Honduran efforts for democracy. Lisa Sullivan of School of the Americas Watch is now touring major U.S. cities (see schedule here) and a Rights Action will also be touring in October (more information at info@rightsaction.org). U.S. citizens can attend these events to learn about what the press is not reporting and find ways to support democracy in our Hemisphere
Posted by Laura Carlsen at 9:11 PM