MexicoBlog Story: A Rite of Purification and Rededication in the Sacred Space of Monte Albán, Oaxaca

On September 12, the Caravan to the South of Mexico, organized by the Movement for Peace with Justice and Dignity, was in Oaxaca City.  Early in the morning all 300-400 of the caravaneros, those traveling with the Caravan in 13 buses and many cars, joined by their host organizations from Oaxaca, went up a mountain to Monte Albán, one of the oldest sites of Mesoamerican civilization. There they were received by an indigenous Zapotec ceremony of healing.
Women and men whose families have lost someone in the drug war, the victims, led the procession. Everyone else descended the steep stairs into the plaza holding hands five abreast. They were walking in the footsteps of  Zapotecas and Mixtecas who have trod those stones for nearly three thousand years.

The victims of the war formed an inner circle, around an altar constructed in the style of an ofrenda for Dia de los Muertos, Day of the Dead, with flowers, candles and burning copal incense. The rest of the caravaneros and their Oaxacan hosts formed a large circle around them. A Zapotec woman, speaking in a clear, strong voice, explained the significance of each act and item in the ritual and recited prayers to the gods. 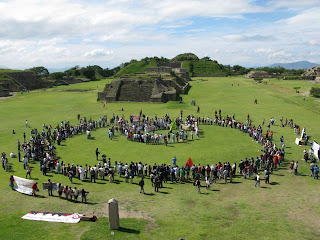 Each one of the victims was then blessed with copal by curanderas, woman healers in traditional dress. They passed the copal smoke slowly from head to foot, side to side and front and back of each person, totally bathing and purifying them with the sacred fumes.
The leader then had the assembled call on the four cardinal directions:  holding both hands up, palms outward, everyone first faced East, the source of the warmth and fierce power of Father Sun; then to the North, whose cold makes us strong and able to endure, then to the West, towards the darkness of night, the underworld and the source of our dreams, and finally to the South, the direction of Mother Earth, the source of fertility.
Javier Sicilia, leader of the Movement for Peace with Justice and Dignity and a victim of the war through the loss of his son, was asked to step forward. The leader explained that according to Zapotec custom -- and the custom of all indigenous communities -- when a person has completed all the cargos, the various and increasingly demanding communal charges or responsiblities, he is considered ready to lead the community. As a symbol of this highest cargo, he is given a staff (a bastón, symbolic of a stalk of maís-corn, the staff of life). As Javier Sicilia was seen to have completed his cargos, he was instructed to kneel.  The senior woman of the community then gave him the bastón.  He was then massaged with healing herbs and cleansed with copal.


Next, the assembled group was instructed to walk in a circle to the left and reflect on all the burdens of life that they carried. Then the direction was reversed. Walking to the right, they were to let go of those burdens.


Finally, as an act of communion with the gods of life and death and with one-another, a symbolic meal of corn tortillas, honey and mezcal -- an alcoholic drink made from the maguey or agave plant -- was shared by everyone.

In silence, all then walked back up the stairs, leaving the ancient, sacred place, blessed -- and hopefully purified -- to re-enter the mundane world and the sacred work of the Caravan.
Posted by Reed Brundage at 4:58 PM