Houston, Texas - Breitbart Texas obtained internal federal government photos depicting the conditions of foreign children warehoused by authorities on U.S. soil on Wednesday night. Thousands of illegal immigrants have overrun U.S. border security and their processing centers in Texas along the U.S./Mexico border. Unaccompanied minors, including young girls under the age of 12, are making the dangerous journey from Central America and Mexico, through cartel-controlled territories, and across the porous border onto U.S. soil.

The photos illuminate the conditions of the U.S. Border Patrol’s processing centers, as well as the overwhelming task Border Patrol is facing. 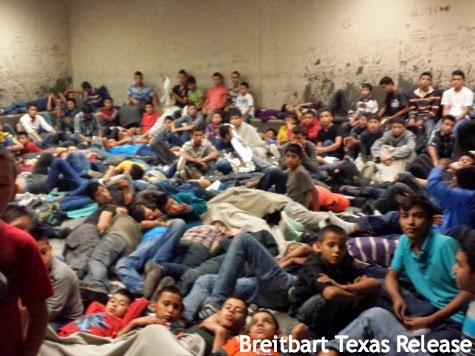 “Given the deteriorating security and economic conditions in the Central American countries where most of these children and adult immigrants came from, it's hard to understand how DHS didn't see this coming,” Longmire said. “The trend towards increased cross-border movement towards south Texas and away from Arizona has been apparent; the trend of Central Americans starting to outnumber Mexican crossers has been apparent. Even worse is believing that DHS knew this was coming, but didn't have the resources or ability to cut through bureaucratic red tape to prepare more quickly. Read more.