Stratfor: Two years into Mexican President Enrique Pena Nieto's six-year term, the president has already managed to pass contentious energy reform legislation that will allow foreign energy firms to operate independently inside the country. The government will award the first of these contracts in the first half of 2015, marking the beginning of an ambitious effort to revitalize Mexico's lagging energy sector.

For foreign companies, however, 2015 will also be an introduction to Mexico's complex security environment and its shifting constellation of transnational criminal groups, commonly referred to as cartels. Mexico's state-owned energy company, Petroleos Mexicanos, or Pemex, and its various contractors are already keenly aware of the risks these groups pose. This risk has intensified in recent years as organized crime groups have sought to diversify their operations beyond trafficking and have expanded fuel theft.

The past decade has seen tens of thousands of homicides in Mexico and a degradation of overall public security in many areas. The root cause of this violence is increased competition over drug trafficking routes into the United States. Pena Nieto and his two predecessors made it a priority to reduce violence related to these turf wars by tasking Mexico’s military with leading a campaign to target the offenders. Criminal groups have reacted to this increased pressure and pressure from rival crime groups by expanding their revenue sources to both fund their wars and bribe officials. Expansion means diversification, and crime groups have increasingly turned to kidnapping, extortion, cargo theft, illegal gambling, money laundering and other operations. One especially lucrative enterprise has been the theft and resale of hydrocarbon products.

This diversification has led to major shifts. According to a 2013 Organization of American States report, revenue to maintain a crime group's operational costs can comprise 35 percent local funding, meaning activities other than trafficking illicit drugs for sale on the global market. Since 2010, hydrocarbons' role in this revenue has expanded dramatically. While small local gangs and corrupt employees have long preyed on Pemex's infrastructure, large crime groups collectively receive more than a billion dollars in profit annually from hydrocarbon theft, primarily of gasoline and diesel. And while this diversification began as a way of safeguarding drug trafficking routes, it now provides billions of dollars in revenue in and of itself. What was once a means is now an end. Criminal organizations in Mexico now compete for the right to exploit local populations and businesses. This has proliferated into smaller turf wars not directly related to drug trafficking.

As opposed to the smaller actors previously involved, crime groups have the capacity to organize hydrocarbon theft on a massive scale across multiple regions with a high level of efficiency. Many of these operations center on drilling into underground pipelines. Illegal tapping of Pemex pipelines has cost the company 15 billion pesos ($1.2 billion) over the past year according to September statements by Pemex chief Emilio Lozoya. From January to September of 2014, 7.5 million barrels of gasoline were stolen. The rate of theft is on the rise, according to a Pemex 2013 Sustainability Report. In 2013, officials discovered 3,052 illegal taps nationwide, up from 1,749 in 2012 and 1,334 in 2011. At the moment, $1.2 billion represents a minor share of Pemex’s gross income of roughly $108.3 billion in 2013, but the rate of expansion signals more losses in coming years unless Mexico clamps down on crime groups and wholesale buyers. 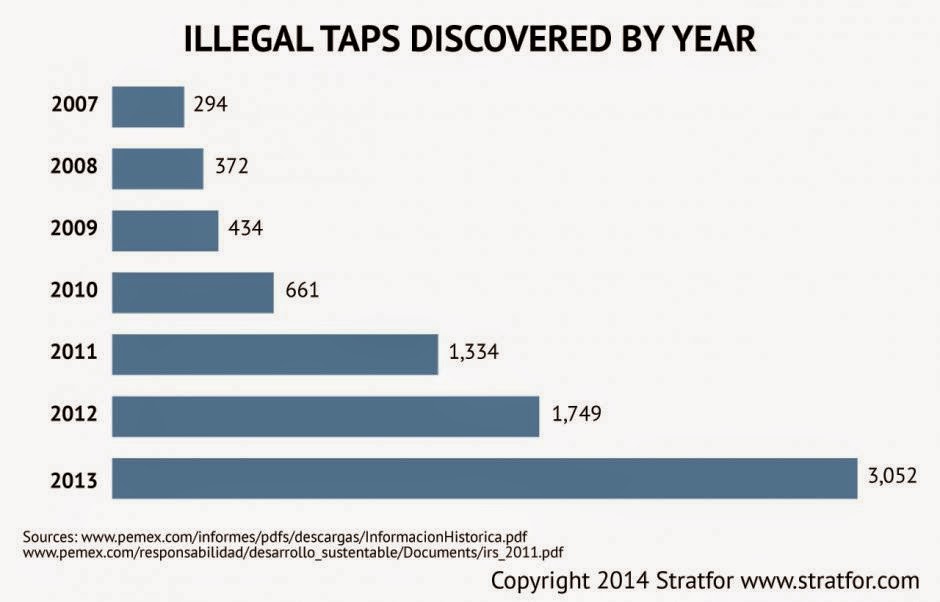 Although these fuel theft operations are ongoing along virtually every pipeline route, the territories in the east have seen the greatest uptick since 2010. This area is largely within the domain of the Tamaulipas-based organized crime groups, including Los Zetas and the various Gulf cartel gangs. In 2013, at least half the illegal pipeline taps discovered were inside this territory. The theft and resale of gasoline in Tamaulipas state serves as one example highlighting potential profits for organized crime. According to a June 2014 report by Milenio, organized crime now controls approximately 15 percent of gasoline sales in Tamaulipas state and earns roughly $268 million per year. Crime groups in Tamaulipas also receive revenue from other products, including crude oil. In September, police dismantled a Guanajuato-based crime ring that had been purchasing 25,000 barrels of oil per month from a Gulf cartel gang in Tamaulipas state and reselling it to companies in Guanajuato, Jalisco and San Luis Potosi states. This represents only a small portion of the nation's hydrocarbon theft problem.

Demand has stimulated organized crime’s expansion into hydrocarbon theft and crime groups have proven particularly adept. The technical skills needed to tap into Pemex pipelines are not sophisticated, but these groups command significant resources and have a greater capacity to corrupt Pemex staff and contractors. These employees can then allow criminal organizations to operate along pipelines and around installations without oversight. They can also provide intelligence about the precise locations of pipeline routes and their current status. They can even allow criminals to steal directly from refineries. The Mexican army and federal police forces in October 2013 arrested 39 employees and nine contractors at a Pemex refinery in Salamanca, Guanajuato, for fuel theft. The problem, however, is nationwide, and organized crime groups have made heavy use of corrupt employees in many states.

The financial incentives behind fuel theft have led to violent competition over the territory needed for these operations. Summer 2014 saw a turf war between Los Zetas and a yet to be identified rival in southeastern Veracruz state. In August a firefight broke out between rival groups over the right to siphon from a Pemex pipeline in Cosoleacaque, Veracruz.

While the levels of criminal violence associated with turf wars over fuel theft are far lower than those from drug trafficking, employees in Mexico’s energy sector are particularly vulnerable. Expanding fuel theft operations requires collusion with Pemex officials and workers operating along pipelines. This means employees are often targeted for coercion or bribery, as well as extortion and kidnapping. In Coatzacoalcos, Veracruz, in September authorities found the bodies of two former Pemex employees who had criminal records of fraud and hydrocarbon theft. An accompanying message indicated that the murders were related to a dispute between two crime groups. According to the Tabasco state attorney general, this violence has spread from Veracruz into the western part of that state.

The Impact of Energy Reform

Up to this point, Pemex and its contractors have been the bystanders caught in the crossfire of these turf wars. The advent of energy reform, however, means that foreign companies will be increasingly involved in tapping into Mexico’s energy resources. These new players will diversify the parties involved and will constitute more targets for organized crime to exploit.

The current level of insecurity in Mexico's energy sector will not significantly deter potential investors; multinational energy firms are accustomed to operating in far more hostile environments. On top of this, most foreign interest is centered primarily on the offshore blocks currently undergoing bidding. In time, though, foreign energy companies will move operations and employees to onshore projects and face the rising threat of hydrocarbon theft. This could not only bring about financial losses, but could also induce criminal groups to target staff with both violence and bribes. Moreover, any prospective partner organization could already have its own major corruption issues or itself be an extension of organized crime, as was the case for a Guanajuato-based crime ring operated by the owner of Petro Bajio, a company with Pemex contracts to transport hydrocarbons.

Homicides in Mexico have been gradually dropping since 2012. From January to October 2014, they fell to 13,129 compared to 18,337 during the same period in 2012. This is partly due to improved public safety institutions in violent hotspots but also to a shift in the internal dynamics of organized crime as a whole. This reduction has been not only a relief for the central government, but also for communities such as Ciudad Juarez, which has seen dramatic security improvements since the city’s peak drug-related violence in 2010. Criminal groups' diversification into fuel theft and other activities, however, has introduced a new challenge for authorities because it directly impacts the national economy and a sector the country is relying on for increased foreign investment.

The government's response has already started. In May the militarydeployed troops to Tamaulipas in response to rising criminal violence in the south. This ongoing push was designed to target the heads of the powerful Tamaulipas-based crime groups — groups that are the most active in exploiting hydrocarbon products nationwide. Thus far, a number of crime bosses have been captured or killed in these operations, including the leaders who likely had been providing stolen crude to the crime ring based in Guanajuato mentioned above. The six-month investigation that culminated in the dismantling of the crime ring, as well as the ongoing operations in Tamaulipas that are running parallel, highlight Mexico’s intent to combat both supply and demand. Meanwhile, Pemex announced in October that it would invest $228 million into improving its ability to detect illegal taps throughout its pipeline system.

Ending hydrocarbon theft is still an uphill battle for Mexico City. Mexico’s federal troops, still the primary tool in combatting organized crime, are already heavily committed to efforts at improving rule of law in multiple regions. Self-defense militias have formed in Michoacan and unrest has emerged from Mexico’s southwest over the Sept. 26 disappearances of 43 students in Guerrero. Although national levels of criminal violence have dropped, states in central and southwest Mexico have seen sharp rises over the past two years in both drug-related violence and criminal activities such as kidnapping and extortion. Mexico City, as a result, has had to balance these competing security priorities.

Fuel theft will not disappear in the coming years and will instead likely expand. Any slowing of this expansion will require effective intervention from Mexican authorities. Because of competing priorities, this will be difficult. As foreign companies enter the energy sector, they will risk exposure to organized crime's hydrocarbon theft. The extent of this exposure will depend on the extent of Mexico City's efforts.
Posted by Nidia Bautista at 11:26 AM