As the peace caravan arrived in Baltimore yesterday morning, many of the 100-some people on board still slept, hunched over their seats or slumped on the shoulders of their bus mates. With a light summer rain falling, we began to pass row after row of abandoned houses. A member of a Baltimore host organization explained the background of a city that has been bombed out--not by aerial strikes, but by economic crisis. The results were strikingly similar.

Along North Avenue and Fulton Avenue, entire blocks of houses were boarded up and abandoned. Some have been gutted by time or rehab speculators. Others stand as they have for more than a hundred years, ready to house families behind their strong brick walls. Except that money, racism and the perversion of the financial system have blocked their doors. Families are on the street while houses remain empty.

We drove up to Irvington Park where a coalition of Baltimore groups hosted a picnic with the theme "Keep Them Home". Leaders of a Beautiful Struggle (LBS), a community organization that works with imprisoned and recently released youth, greeted the caravan, along with the NAACP, Casa Maryland and others.

Two women rappers/singers performed works protesting the construction of yet another prison in a community that lacks basic services. Local groups like LBS have managed to block the prison so far and are working to have the multi-million dollar project cancelled altogether. 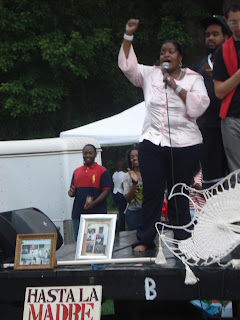 "I don't know Spanish," she told the caravan. "But I know a lot about losing a loved one."

On Sept. 27, 2004, Armstrong's sixteen year old son Eric was shot and killed. Just this February, she said, she heard a knock on the door. "It was the police. They told me they found my son's murderer. he was shot with a 9mm rifle by a 14-year old."

"I thought to myself, 'why do we have 9mm rifles on the ground?  how can it be that we live in a neighborhood where it's easier for a 14-year old to get a gun, than it is to get a tomato.'"

Among the crowd, the many mothers and other relatives of the murdered and disappeared nodded. One woman's lost son became the brother of the other's.

"Now they are all my angels," said Araceli Rodriguez, displaying the photo of Armstrong's son alongside that of her own, kidnapped and disappeared in the state of Michoacan.

Posted by Laura Carlsen at 7:47 PM