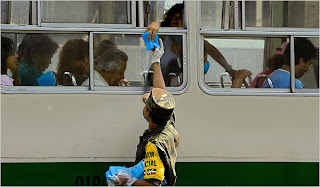 Mexico has long been considered the laboratory of globalization. Now a potentially deadly virus has germinated in that laboratory, finding ideal conditions to move quickly along a path toward global pandemic.

Those conditions include: a rapid transition from small livestock production to industrial meat farms after NAFTA established incentives for foreign investment, the failed decentralization of Mexico’s health system along lines established by multilateral lending banks, lax and non-enforced environmental and health regulations as the Mexican government was forced to downsize, the increased flow of goods and persons across borders, and restricted access to life-saving medicines due to NAFTA intellectual property monopolies for pharmaceutical companies.

The swine flu alert in Mexico rose to a level four this week, meaning that it is spreading human-to-human and shows a significant increase in the risk of becoming a pandemic. Schools are closed until at least May 6. The Mexico City government shut down the city’s 35,000 restaurants on Monday. Countries including Canada, Argentina, and several European nations have cancelled flights between Mexico in an effort to contain the spread of the new flu, although Keiji Fukuda of the WHO noted, “closing borders or restricting travel has really little effect in stopping the movement of this virus” now that cases are appearing across the globe.

Here in Mexico City, all public events have been cancelled and people have flocked to the supermarkets in surgical masks to stock up on food. I had to go out yesterday and discovered less traffic (small consolation) but a fairly normal number of people in the streets, many wearing the recommended masks. Traditional practices of greeting each other with kisses and handshakes have been suspended and a cough is seen as tantamount to assault.

But I didn’t feel an atmosphere of panic. Mexicans seem to have accepted the epidemic and changes in their lives with a combination of cultural fatalism and survival instincts although many are skeptical of the government’s claims and the measures taken.

The media has been providing a steady stream of real and generally non-alarmist information out about the risks. The flu is a mutant form of swine flu, human seasonal flu and bird flu. In itself, it is not lethal but it leads to complications of “atypical pneumonia”. It’s atypical because it’s out of season and because victims tend to concentrate in the middle age range. Unlike regular pneumonia that picks off the very young and the very old, deaths of this virus tend to be within the 20-40 range. No-one seems to know exactly why this is. In fact, it is the newness of the virus that has raised the alarm. It can be treated successfully with anti-virals but there is no vaccine for it.

The strategy is to avoid enclosed spaces with large numbers of people. Although people are obeying the measures and following recommendations, increasing doubts exist about the transparency and honesty of government information. A press conference by the Secretaries of Health and Labor on April 29 ended in chaos, with reporters yelling out questions to clear up contradictions between the official version that only 26 cases of swine flu had been confirmed in Mexico and reports of far greater numbers.

Swine Flu and the Smithfield Connection
Because of the population density of Mexico City it continues to be the center of the epidemic. Of the seven deaths from swine flu confirmed by the Mexican government and the WHO, all were in Mexico City—six in the delegation where we live.

However, the first reports came from Perote, Veracruz--home to a huge hog farm co-owned and operated by the U.S. transnational industrial livestock company Smithfield and a Mexican company. In early March, local health officials proclaimed an epidemiological alert due to a flu with the exact same characteristics. La Jornada reported that Perote officials claimed 60% of the population suffered from flu, pneumonia and bronchitis. Federal health officials reportedly ignored the complaints until April 5, when they placed sanitary restrictions on Carroll Farms.
Mexico’s Secretary of Health Jose Angel Cordova discarded the theory that the flu originated in the hog farms of Perote. But the information provided led to more confusion than clarity about that. This needs to be independently and seriously analyzed because the fact remains that the people in Perote show high indices of similar and unexplained illnesses and the government information is partial and inconclusive.

Silvia Ribeiro of the ETC Group told the Americas Program that Mexican officials “act like this is something that fell from the sky, but we’ve known for a long time that industrial livestock operations, especially hogs, are a breeding ground for recombinant viruses. Carroll Farms is just one example, an important one in this case, but it’s also true of industrial chicken farms.”
Anybody who has seen an industrial hog farm knows the risk of disease. The unimaginable concentrations of filth, corrals filled with sick and suffering animals pumped full of antibiotics, and buzzing with flies that then carry disease to the human population create a disease paradise.

As Mike Davis points out,
“The paradox of this swine flu panic is that, while totally unexpected, it was accurately predicted. Six years ago, Science dedicated a major story to evidence that "after years of stability, the North American swine flu virus has jumped onto an evolutionary fast track".

NAFTA unleashed the spread of industrial livestock farms in Mexico by creating investment incentives for transnational companies to relocate operations there. The “race to the bottom” –where companies move production to areas where environmental and health restrictions and enforcement are low, is exemplified in livestock farming.

Smithfield has had more than its share of legal problems stemming from its operations in the United States. Most recently it announced a decision to reject a $75 million dollar settlement on claims brought in Missouri by residents complaining of the stench. On August 8, 1997 a federal court judge in Virginia imposed a $12.6 million fine on Smithfield Foods for violation of the Clean Water Act. In September of 1999 an appeal upheld the ruling.

In 1994, the year NAFTA went into effect, Smithfield established the Perote operations with the Mexican agrobusiness AMSA (Agroindustrias Unidas de México S.A. de C.V.). In 1999 it bought the U.S. company Carroll’s Foods for $500 million and began rapid expanision of its operations in Perote.

Banking on Disease
Livestock transnationals are not the only economic interests involved in preserving the dangerous situation that led to this epidemic. In an article entitled “An epidemic of profiteering”, she notes that the epidemic means big business for the pharmaceutical companies who hold patents on anti-viral medicines. “Shares in Gilead rose 3%, Roche 4% and Glaxo 6%, and that’s only the beginning.”

Also to blame is neoliberal globalization and its impact on human health. Ribeiro has in interesting theory on why Mexico City is the focal point of the virus. “People living in the city--and in a way the city itself--suffer from a depressed immunological system. Especially for the poor, the lack of public services, water and health services, stress and poor nutrition means that people die not only from increased contagion but also from low defenses here.”

Mexico’s grand experiment in sink or swim neoliberalism included privatization and erosion of health systems and basic services. Mexican health policy expert Gustavo Leal told the CIP Americas Program that “the notorious delay in the response of the federal government can be attributed in part to the decentralization of healthcare promoted by international finance institutions such as the World Bank. “This broke down the chain of command and the flow of information,” Leal said. Tellingly, the health care network that has responded most vigorously to the Mexican swine flu epidemic has been the Mexican Social Security Institute (IMSS), an institute that conservatives and the same IFIs have been trying to privatize for years. Armies of IMSS healthcare professionals are attending to cases and reporting from the field throughout the country.

SPP: Integrated Risk Management or Integrated Risks?
It’s ironic and inexcusable that the most integrated region in the world responded so poorly to the recent epidemic. One of the main selling points for the extension of NAFTA into the Security and Prosperity Partnership (SPP) was that a working group was preparing integrated response to epidemics that would make all North Americans safer. In fact, this was one of the few publically announced activities of the secretive working groups that primarily devote their activities to making it easier for the Smithfields and Tysons to do business throughout the continent.

The SPP North American Plan declares that it provides a framework to accomplish the following:
* Detect, contain and control an avian influenza outbreak and prevent transmission to humans;
* Prevent or slow the entry of a new strain of human influenza into North America;
* Minimize illness and deaths; and
* Sustain infrastructure and mitigate the impact to the economy and the functioning of society

Mexico despite being a poor country with greater risk of disease, had not received the technology needed to immediately analyze flu strains so had to send samples to the Canadian Health Ministry and the Center for Disease Control (CDC) in Atlanta for analysis. About a week was lost in this process. Moreover, as mentioned the CDC didn’t respond quickly or effectively.

Where was this plan when Perote was reporting illness and a local epidemic way back in March? Has this group done serious research on the risks of industrial livestock production? Why did the CDC take nearly a week to respond to reports of the Mexican epidemic?

The answers lie in what Davis refers to as the “global political clout” of the livestock transnationals. Another hint can be found in this phrase from the SPP announcement: “Central to the Plan is a North American approach that undertakes measures to maintain the flow of people, services, and cargo across the borders during a severe pandemic while striving to protect our citizens.”

As is the case with all of NAFTA, the top priority is business as usual. While closing the borders is not the answer, an investigation into the root causes of the epidemic must lead to a full accounting of the risks of globalization and industrial farming. Poor countries with poor health run the greatest risks and yet the current system gives their concerns short shrift and little resources.

A misplaced priority on profits over human health in the context of a globalized world led to this epidemic and its possibilities becoming the world’s latest pandemic.