Mexican Civil Society and NGOs Speak Out Against US Militarization 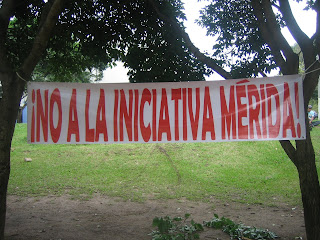 
The letter come following the approval of 2009 appropriations for the controversial three year Merida Initiative which provides US funds to aid Mexican president Felipe Calderón’s war on drugs and just as new talks begin in Congress to nearly double those funds through the FY09 Appropriations Supplemental Request. The signatories cite major human rights violations perpetrated by the Mexican military as it has taken on the drug cartels, a role that is normally performed by the police forces. The letter states:


“The deployment of the Mexican Army to carry out public security tasks that legally correspond to the civilian police has brought with it a significant increase in human rights violations in the last two years, including extrajudicial executions, torture, arbitrary detentions and rape. In fact, the number of complaints for human rights violations committed by members of the armed forces registered by the National Human Rights Commission has increased six-fold during the last two years, reaching 1,230 in 2008.”

The letter also refers to the responsibility of the US government:


“We respectfully request that the U.S. Congress and Department of State, in both the Merida Initiative as in other programs to support public security in Mexico, does not allocate funds or direct programs to the armed forces. We believe that a change of paradigm is needed.”

Specifically mentioned root causes of the problem include inequality as well as lack of access to education and job opportunities.


For further analysis of the Merida Initiative:


A Primer on Plan Mexico
http://americas.irc-online.org/am/5204

Posted by Laura Carlsen at 7:36 PM