ALBA and Via Campesina Issue New Declarations Against the Honduran Coup 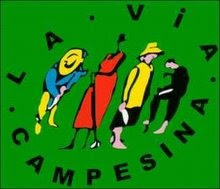 The following are our translations of a message from Via Campesina Honduras and the official pronouncement of ALBA received today:

Message from Via Campesina Honduras:

Confronted with the COUP D'ETAT perpetrated by the military and powerful groups against all of Honduras, we communicate the following:

1.- That the Front of Popular Resistance has been formed, that a civil and peaceful struggle has begun to re-establish constitutional order and bring about the return of the legitimate President of Honduras, Manuel Zelaya Rosales.

2.- That there is full international solidarity--the United States, Europe, Latin America, Asia--demanding that the coup leaders give up the government that they usurped.

3.- The information controlled by the coup that denies and tries to hide the widespread demonstrations of the people in defense of popular rights in Santa Bárbara, Tegucigalpa, La Ceiba, El Progreso and other places is a lie.

4.- That the population should know that they shut down Channel 8, Channel 36, and pulled the international channels CNN en Español and Telesur off the air.

5.- National stations broadcast only what is in the interests of the groups in power and the coup government.

And the ALBA statement announced in Managua today:

On Sunday, June 28 in the early morning, when the Honduran people prepared to exercise its democratic rights in a non-binding referendum promoted by President Manuel Zelaya Rosales to strengthen participatory democracy, a group of hooded soldiers that claimed to be receiving orders from the High Command of the Armed Forces broke into the home of President Zelaya to kidnap him, hold him incommunicado for several hours, and then violently expel him from his country.

Immediately, the people of Honduras reacted as the dignified heirs of the legacy of Francisco Morazan, in the streets of various cities and villages of Honduras. In the early hours of the morning, hundreds of polls received thousands of women and men who went to exercise their right to vote. When they learned of the kidnapping of their president, they went out into the streets to protest the coup d'etat, setting an example of heroism by confronting rifles and tanks unarmed.


With one voice, the governments and peoples of the continent condemned the coup, stating clearly that in Honduras there is only one president and only one government: that of President Manuel Zelaya Rosales. We welcome the declarations of condemnation that, from early on, began to come from other governments of the world.

Faced with the urgency of the situation, the governments of the Bolivarian Alliance for the Peoples of Our America (ALBA) immediately called an extraordinary meeting of the Presidential Council to agree on firm actions to defeat the coup in Honduras, to support the heroic people of Morazan, and to unconditionally re-establish President Manuel Zelaya Rosales in his legitimate functions.

After analyzing the circumstances in which this coup came to pass, and due to the gravity of the violations of international law, multilateral conventions and our nations' pacts with the government of Honduras, and in light of the absolute repudiation of the dictatorial government that seeks to impose itself manifested by the international community, the member nations of ALBA have decided to withdraw our ambassadors and leave the minimum diplomatic representation in Tegucigalpa until the legitimate government of President Manuel Zelaya Rosales is reinstated.

We also recognize the personnel designated by President Zelaya as the only diplomatic representatives of Honduras in our countries. Under no circumstances will we accredit anyone designated by the usurpers.

As full members of the various systems of integration in the continent, we urge our fellow nations in UNASUR, SICA, CARICOM, Rio Group, United Nations and the OAS to treat those who have carried out this act of aggression against the Honduran people in this same way.

We have also agreed to declare ourselves on permanent alert to stand by the brave people of Honduras in the acts of resistance they have undertaken. We invoke Art. 2 and 3 of the Political Constitution of Honduras:


“Art. 2: Sovereignty corresponds to the People, from which all the powers of the state emanate that are exercised through representation. The Sovereignty of the People can also be exercised in direct form, through the plebescite and referendum. The substitution of popular Sovereignty and the usurpation of the constituted powers are typified as crimes of Betrayal of the Country. The responsibility in these cases is imprescriptible and can be automatically deduced or at the request of any citizen."

“Art. 3: No-one owes obedience to a government that has usurped power or to those who assume functions or public posts by the force of arms or using means or procedures that rupture or deny what the Constitution and the laws establish. The verified acts by such authorities are null. The people have the right to recur to insurrection in defense of the constitutional order."

[We also invoke] the principles of International Law to support the acts of resistance and rebellion of the people faced with attempts of domination. To the teachers, workers, women, youth, farmers, indigenous people, honest businessmen and women, intellectuals and other actors in Honduran society, we assure them that together we will achieve victory over the coup leaders that seek to impose their rule on the brave people of Francisco Morazan...

Those who seek to direct the coup should know that it will be impossible to impose their will and mock international justice. Sooner or later they will be defeated. To the officers and soldiers of the Armed Forces of Honduras, we call on you to rectify your actions and place your arms at the service of the people of Honduras and of their Commander in Chief, the President Jose Manuel Zelaya Rosales.

The countries of ALBA, in consultation with the governments of the continent and with diverse organizations that guarantee compliance with International Law, are setting forth measures so the serious violations and crimes that are being committed will not go unpunished.

The only path open to the coup leaders is to cease their present course and guarantee the immediate, safe and unconditional return of President Jose Manuel Zelaya Rosales to his constitutional functions.

The Republic of Honduras is a full member of ALBA, as well as of other regional integration groups and multilateral organisms whose membership demands respect for the sovereignty of the people and the constitution. Although these fundamental conditions have been violated by the coup, the governments of ALBA have decided to continue all international cooperation programs agreed to under President Zelaya.

We also propose to apply exemplary sanctions in all multilateral organizations and integration groups, to contribute to bringing about the immediate restitution of the constituonal order in Honduras, and to make good on the principle of action that Jose Marti taught us when he said: "If each one does his duty, no-one can overome us.

The governments of ALBA declare ourselves in permanent consultation session, with all the governments of the continent, to evaluate other joint actions that enable us to stand by the Honduran people in the re-establishment of legality and the restitution of President Manuel Zelaya Rosales.

Two hundred years from the historic struggle of our people throughout our continent, and following the eternal examples of the General of free men Augusto Cesar Sandino, Francisco Morazan, and faithful to the word of The Liberator Simon Bolivar, we are confident of victory, along with the Honduran people and the peoples of the world. Because "all the people of the world that have fought for liberty have exterminated their tyrants in the end."

Managua June 29, 2009
Presidential Council of the Bolivarian Alliance for the Peoples of Our America
Posted by Laura Carlsen at 7:30 PM