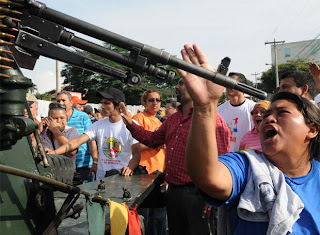 Honduran President Manuel Zelaya suspended his return to his country scheduled for tomorrow, July 2, awaiting the termination of a 72-hour ultimatum issued by the Organization of America States yesterday.

"The OAS has called for 72 hours (to re-establish President Zelaya in power) and we agree with this decision," Zelaya stated.

Supporters of the coup, pro-Zelaya forces and the international community all worked to consolidate their ranks over the past few days, as Honduras prepared for the first direct face-off since the June 28 coup d'Etat deposed elected president of Honduras Manuel Zelaya Rosales. Zelaya had initially announced he would return to Honduras tomorrow, where coup leaders said he would be "immediately arrested" if he landed on Honduran territory.

The suspension of his return offers yet another possible diplomatic solution to what could have been a violent confrontation tomorrow. Zelaya met with the OAS yesterday, which announced that the coup had 72 hours to reinstated the president and if it failed to do so, Honduras would be suspended from the OAS. The text condemns the coup, recognizes Zelaya as the president, and calls for the Secretary General to seek diplomatic solutions.

It adds, "Should these prove unsuccessful within 72 hours, the Special General Assembly shall forthwith invoke Article 21 of the Inter-American Democratic Charter to suspend Honduras’ membership." (see full text below).

Three major actors in the drama that has captivated the world from this small, impoverished nation have tightened their positions in the lead-up to tomorrow's show-down.

The coup dug in at a rally held yesterday. It issued an arrest order for Zelaya on 18 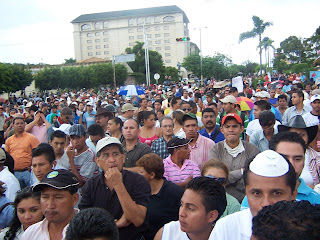 charges including "abuse of authority" and "betrayal of the country". Attorney General Luis Alberto Rubi said the president would be "immediately arrested" on landing in Honduran territory.

In an interview with AP, the leader of the coup government, Roberto Micheletti, stated, "No one can make me resign if I do not violate the laws of the country."

"If there is any invasion against our country, 7.5 million Hondurans will be ready to defend our territory and our laws and our homeland and our government." AP reports that "Micheletti said it was too late for Zelaya to avoid arrest."

Meanwhile, the international community continued to close ranks against the coup and has begun to issue sanctions and ultimatums to the Honduran coup leaders. The General Assembly of the United Nations issued a resolution deploring the “interrupted the democratic and constitutional order and the legitimate exercise of power in Honduras.” The text demands "the immediate and unconditional restoration of the legitimate and Constitutional Government of the President of the Republic, Mr. José Manuel Zelaya Rosales, and of the legally established authority in Honduras".

Robert Zoellick, head of the World Bank, announced that the Bank will suspend loans to Honduras--around $80 million planned for the next fiscal year.

In a further show of international support, President Zelaya was to return tomorrow accompanied by the Secretary General of the Organization of American States, Jose Insulza and presidents Cristina Fernandez de Kirchner of Argentina and Rafael Correa of Ecuador. Now plans for return await the result of the OAS ultimatum.

Indigenous, Afro-Honduram, farmer and worker organizations have emitted numerous declarations calling for the return of Zelaya and constitutional order, amid street protests and a widespread work stoppage called by unions. The recently formed Popular Resistance Front called for delegations to travel to Honduras to stand by the popular organizations of Honduras in support of the return of the democratically elected president and inform the situation.

The Front has called for mass demonstrations in the country. It also called on foreign media, members of grassroots organizations and human rights groups to increase pressure on the coup and support the call for reinstatement of the president.

Rafael Alegria, leader of Via Campesina rural organizations in the country told the Americas Program in an exclusive interview this morning that protest movements are mobilizing throughout the country and awaiting the end of the 72-hour period.

"We are waiting to see if in the 72-hour period set by the OAS, we can achieve the re-establishment of the rule of law, to strengthen democratic processes that are taking place throughout all of Latin America."

As in any military coup, the fourth actor--the armed forces--plays a major role in determining how events unfold. Micheletti appeared yesterday before a pro-coup crowd, backed up by uniformed military officers.

Coup leaders are portraying the return of the Honduran president as a "foreign invasion" and evoking images of the Cold War to justify their position. Supporters flashed signs against Venezuelan president Hugo Chavez to the media at their rally. Coup leaders have been taken aback by the U.S. government's condemnation of the coup and asserted that the international community's position is due to ignorance.

"I'm surprised that Barack Obama is not better informed," retired Col. Natanael Guevara, 56, said, referring to U.S. condemnation of the coup. "If Honduras falls, Central America falls and then Mexico. I'm ready to put my uniform back on if it means defending my country from Hugo Chavez."

Alegria said that the army has blocked protesters from traveling to Tegucigalpa and other points. He added that they have learned that the military is recruiting young people and calling out reservists, although some battalions are refusing to repress the Honduran protesters.

OAS RESOLUTION ON THE POLITICAL CRISIS IN HONDURAS

(Adopted at the plenary session, held on July 1, 2009 and
pending to be revised by the Style Committee)

GRAVELY CONCERNED about the political crisis in the Republic of Honduras as a result of the coup d’état against the government of President José Manuel Zelaya Rosales, which has produced an unconstitutional alteration of the democratic order;

CONVENED urgently by the Permanent Council in accordance with Article 20 of the Inter-American Democratic Charter;

REITERATING the principles and purposes established in the Charter of the Organization of American States and the Inter-American Democratic Charter on the strengthening and preservation of the democratic institutional system in member states, as well as the importance of strict adherence to and respect for human rights and fundamental freedoms, and the principle of nonintervention in the internal affairs of other states; and

TAKING NOTE of the declarations by international organizations, sub-regional groups, and governments of the member states,

1. To condemn vehemently the coup d’état staged against the constitutionally established Government of Honduras, and the arbitrary detention and expulsion from the country of the constitutional president José Manuel Zelaya Rosales, which has produced an unconstitutional alteration of the democratic order.

2. To reaffirm that President José Manuel Zelaya Rosales is the constitutional President of Honduras and to demand the immediate, safe, and unconditional return of the President to his constitutional functions.

4. To instruct the Secretary General to undertake, together with representatives of various countries, diplomatic initiatives aimed at restoring democracy and the rule of law and the reinstatement of President Jose Manuel Zelaya Rosales, pursuant to Article 20 of the Inter-American Democratic Charter and report to the Special General Assembly on the results of the initiatives. Should these prove unsuccessful within 72 hours, the Special General Assembly shall forthwith invoke Article 21 of the Inter-American Democratic Charter to suspend Honduras’ membership.

5. To extend this special session of the General Assembly until July 6, 2009.
Posted by Laura Carlsen at 8:58 AM