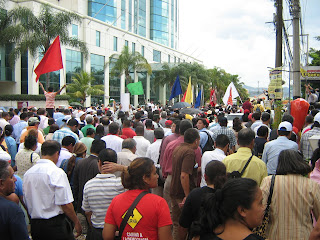 Here are English translations of today's declarations from Via Campesina International and COPINH. There has been a conspicuous absence of voices from the citizens' organizations that support the president and the consultation in the press. CNN claims that they cannot find anyone who speaks in favor of the consultation and the president.

These declarations provide perspectives from that movement. They also warn that social movement leaders are in danger, as criminalization of the opposition follows the coup.

From Via Campesina International:

With the objective of deepening democracy and achieving broader democratic participation, for several months the social organizations of Honduras along with President Manuel Zelaya Rosales have promoted holding a survey (non-binding referendum) this June 28, 2009.

To our great surprise, today at 5:00 A.M. the armed forces carried out a coup d'etat against President Zelaya, blocking in this way, the democratic aspirations of the population that was preparing to carry out the popular consultation.

On hearing this news, the social organizations of of Honduras, including those of Via Campesina, have gone out into the streets to repudiate this deed and demand the return of President Zelaya to that functions that they law mandates.

The government of President Zelaya has been characterized by its defense of workers and campesinos, it is a defender of the Bolivarian Alternative of the Americas (ALBA), and during his administration it has promoted actions that benefit Honduran campesinos.

We believe that these deeds are the desperate acts of the national oligarchy and the hardcore right to preserve the interests of capital, and in particular, of the large transnational corporations. To that end, that have made use of the military forces and the institutions of the country such as the parliament, ministers, neoliberal press and others.

Faced with this unacceptable situation, Via Campesina International demands:

1. Re-establishment of the constitutional order, without bloodshed

2. We call on the army not to repress the population of Honduras that demands a return to democracy

3. That the physical integrity of social leaders, including Rafael Alegria--international leader of Via Campesina--is respected

4. We demand the return of President Zelaya to his functions in Honduras

5. That the authorities guarantee the full democratic exercise of the popular consultation, which is clearly a form of free expression.

From Via Campesina International, we are concerned for the safety of our leaders and organizations of Via Campesina, as well as what could happen to the people of Honduras, in these difficult times.

We also call on campesino organizations and other social movements to protest in front of the Honduran embassies and send letters rejecting the coup d'etat to the embassies in each of their countries.

We express our solidarity with our campesino organizations in Honduras.

From the Civic Council of Popular and Indigenous Organizations of Honduras (COPINH):

Before the disgraceful coup d'etat in Honduras

We Will Not Be Silent or Humiliated!

To the National and International Community

The COPINH condemns the cowardly and dirty coup d'tat against the Constitutional President of the Republic Manuel Zelaya Rosales. We denounce the fascist and terrorist role of the armed forces, of the national congress headed by Roberto Michelleti Bain, of the communications media of sectors of the ultra-right, and the rest of the institutions submissive to the interests of the oligarchy and imperialism that this morning kidnapped the president(), prior to the initiation of the popular consultation. The people are still participating in the non-binding referendum--even faced with repression, even as the campaign of fear continues, and even when confronted with the butt of soldiers' rifles. There is practically a state of siege in the capital and the rest of the country; electricity is cut off, they have a list of leaders to be captured, and Hondurans who are bravely demonstrating in front of the presidential residence are surrounded by tanks and helicopters. Even so they have installed the polls and are exercising their right to participate in the consultation as a form of rebellion. The Honduran people are mobilizing. Since early morning, our organization is calling out its members and has already begun the journey with representatives of the Lenca People on the way to Tegucigalpa.

We tell everyone that the Honduran people are carrying out large demonstrations, actions in their communities, in the municipalities; there are occupations of bridges, and a protest in front of the presidential residence, among others.

From the lands of Lempira, Morazán and Visitación Padilla, we call on the Honduran people in general to demonstrate in defense of their rights and of real and direct democracy for the people, to the fascists we say that they will NOT silence us, that this cowardly act will turn back on them, with great force.

We state that we do not recognize any "substitute" and WE WILL STRUGGLE FOR OUR PEOPLE, FOR OUR RIGHT TO DREAM OF A COUNTRY WITH JUSTICE, EQUITY, LIBERTY AND LIFE.

With the ancestral force of Iselaca and Lempira we raise our voices for life, justice, liberty, dignity and peace.