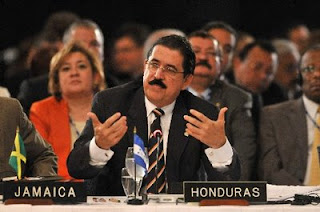 Here is the official text of the OAS Resolution. There is a General Assembly meeting scheduled for Tuesday and Secretary General Jose Insulza has left for Managua where he will meet with Zelaya at a meeting of the Central American Integration System.

The Honduran coup is diplomatically isolated, with nowhere to turn to create even a semblance of legitimacy. Campesino organizations are arriving in the capital city to protest, following long, difficult journeys. There is a work stoppage called for today and a curfew has been installed by the government. What happens next is anybody's guess.

(Adopted at the meeting of June 28, 2009) THE PERMANENT COUNCIL OF THE ORGANIZATION OF AMERICAN STATES,

CONSIDERING the grave situation taking place in the Republic of Honduras as a result of the coup d’etat against the government of President José Manuel Zelaya Rosales, which has produced an unconstitutional alteration of the democratic order, which the Permanent Council rejects and repudiates;

CONCERNED with the break-down of the constitutional order in the Republic of Honduras;

REAFFIRMING the importance of strict adherence and respect for human rights and fundamental freedoms, and the principle of non-intervention in the internal affairs of other States;

REITERATING the principles established in the Charter of the Organization of American States and the Inter-American Democratic Charter on the strengthening and preservation of the democratic institutional system in member states, and

1. To condemn vehemently the coup d’état staged this morning against the constitutionally-established Government of Honduras, and the arbitrary detention and expulsion from the country of the constitutional president José Manuel Zelaya Rosales, which has produced an unconstitutional alteration of the democratic order.

2. To demand the immediate, safe and unconditional return of President José Manuel Zelaya Rosales to his constitutional functions.

3. To declare that no government arising from this unconstitutional interruption will be recognized.

4. To instruct the Secretary General of the OAS to urgently attend the meeting of the Central American Integration System (SICA), that will take place in Managua, Nicaragua, and in accordance with Article 20 of the Inter-American Democratic Charter, to carry out all necessary consultations with the member states of the Organization.

5. To vehemently condemn all acts of violence and especially the reported arbitrary detention of the Minister of Foreign Affairs, Patricia Rodas, other Ministers of Government, as well as the Mayor of San Pedro Sula, and associated individuals, and to demand that their physical safety and security be respected and that they be released immediately.

6. To immediately convene a special session of the OAS General Assembly to take place at the headquarters of the Organization, on Tuesday, June 30, 2009, to take whatever decisions it considers appropriate, in accordance with the Charter of the Organization of American States, international law, and the provisions of the Inter-American Democratic Charter.