• Arias lays down terms: it is a coup d’etat, Zelaya must be restored to power
• Micheletti returns to Tegucigalpa, spurning direct participation
• Commissions set up on both sides to continue mediation process
• Future of talks depends on coup
• Members of U.S. Congress to present bill for suspension of aid

Following the first day of mediation in Costa Rica, President Manuel Zelaya, coup leader Roberto Micheletti and mediator Oscar Arias all appeared before the press to downplay what was clearly a setback for hopes of a timely solution to the Honduran stand-off.

Zelaya and Micheletti did not meet yesterday, although both were present in San Jose. Instead each met separately with Costa Rican President Arias. Then in an unexpected move, Micheletti announced he was returning immediately to Honduras, placing in doubt the future of any direct talks. He later stated vaguely that “he might return if necessary.” 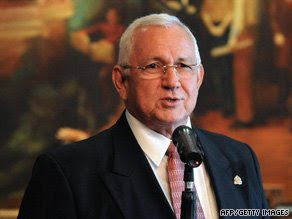 s. In a definition of terms from the outset, Arias stated firmly yesterday that Honduras had suffered a coup d’etat, discarding Micheletti’s arguments that the destitution and exile of President Zelaya responded to legal processes.

At the Thursday press conference, Arias reminded observers that he was among the first heads of state to denounce the coup. Recalling an early scene in the coup drama that has now gone into its second week, he said, “I recognized it [as a coup d’etat] the same day it happened and called for the restoration of President Zelaya.” Zelaya was flown to Costa Rica Jun 28 by the rebel Air Force, where he appeared shortly after arriving in a press conference with Arias while still wearing his pajamas.

In laying out the parameters of the dialogue, Arias also said any proposal that bypassed restoring Zelaya to power was practically off the table. “It is very difficult to talk about a successful negotiation that doesn’t include the restitution of President Zelaya.”

OAS Secretary General Jose Insulza, who has spearheaded diplomatic efforts up to now but is not taking part in the mediation, left no doubt about the minimal requirement for a successful negotiation. Also in a televised press conference, he cited the OAS resolution calling for Zelaya’s restitution and issued a dire warning that if the Honduran coup is allowed to persist, “it could open the door to more coup d’etats in the region.”

Zelaya also called for "the re-establishment of the state of law, democracy and the return of the president elected by the Honduran people," a position he has maintained consistently throughout the conflict.

With the odds stacked against him, Micheletti dug in, saying that Zelaya’s return to power would not even be considered. "The topic not open to discussion is the return of ex-President Zelaya, unless he hands himself over to justice.”

Last night, Arias appeared tired but committed to further dialogue. After the day’s events, he cautioned against high expectations. "Dialogue can produce miracles but not immediate ones. This could take much longer than one might have imagined."

The mediator indicated that the sides will begin to analyze less diametrically opposed issues, leaving the controversial point of Zelaya’s return to last. "My recommendation is that we advance where it is easy and leave the most difficult point for the end," he told the press.

While both sides claim to have a commitment to the mediation and have appointed their respective commissions to continue talks, it is now difficult to imagine what progress can be made. The commissions cannot resolve the core issue and according to a CNN report filed before Micheletti boarded a plane to Honduras, “A talked-about third round, a meeting between Micheletti and Zelaya, was put in doubt by Micheletti's planned departure.”

Coup Will Decide Success or Failure of Talks

As expected in light of both OAS and UN resolutions to condemn the coup, the premises for the talks proved unfavorable to Micheletti’s hopes to consolidate his position as “president” until the November elections. It is therefore not surprising that he decided to return to his bastion of power in the Central American nation still occupied by the Armed Forces rather than expose his position to a mediation process that considers his claim to power illegitimate.

Reading from a prepared statement, Micheletti offered five points to the press, without divulging the contents of his three-hour meeting with Arias. He restated his argument that “no-one is above the law”, referring to legal claims against Zelaya; affirmed that elections will be held in November, promised that the electoral process would be “transparent and secure”, reiterated that at stake was the presidency and other posts, and designated a working group to carry on the discussions in San Jose.

In emphasizing the planned Nov 29 elections, Micheletti seemed to imply that his de facto regime would be overseeing the regularly scheduled elections. He did not mention putting up the date of the elections, a proposal that some U.S. intellectuals and others had assumed was the fallback position of the coup.

Because the mediator and multilateral organizations have established the return of Zelaya to power as a precondition for dialogue, the only way for the talks on Honduras to succeed is for coup leaders to back down. The ball is in their court.

But instead of returning the serve, Roberto Micheletti appeared to pocket the ball and run home with it yesterday. By leaving the talks and going back to the nation that has been held by the Armed Forces since Jun 28, Micheletti once more sends a message to the world that force trumps diplomacy. The physical act of going home is precisely what his counterpart—elected president Manuel Zelaya—cannot do ever since the Armed Forces exiled him and installed Micheletti in power.

With the mediation kicked down a notch to a meeting between commissions, Zelaya has embarked again on his peripatetic travels across the region. Today he flew to the Dominican Republic where he received state honors from President Leonel Fernandez, according to news reports.

Talks continue today in San Jose. At the same time, many fear an impasse already in the early stages of dialogue. The question is: if coup leaders hold the cards to success, what more can be done to pressure them toward a legal solution?

Although the all-important U.S. government has not cut off all aid to the coup yet, international economic sanctions are piling up. The World Bank, IMF and Inter-American Development Bank have frozen loans to Honduras under the coup. The U.S. announced a new cut-off of $16.5 million in military aid and the US Embassy in Honduras also warned that an additional $180 million is at risk. There are still many more pockets of U.S. aid that could be suspended, including security aid under the Merida Initiative, $100 million in a Millennium Challenge grant, and $42 million in development aid.

With a wait-and-see attitude still prevailing in the State Department on aid cut-off, members of Congress plan to present a bill today sponsored by Reps. Delahunt and McGovern “condemning the June 28, 2009 coup d’état in Honduras, calling for the reinstatement of President Jose Manuel Zelaya Rosales, and for other purposes.”

1) Condemns the June 28, 2009 coup d’état in Honduras and refuses to recognize the de facto Micheletti government installed by that coup d’état;

2) Calls on the Obama Administration to continue to refuse to recognize the de facto Micheletti government;

3) Calls for the reinstatement of President Zelaya as President of Honduras;

4) Urges the Obama Administration to suspend non-humanitarian assistance to the de facto
Micheletti government as required by U.S. law and as it deems necessary to compel the return of President Zelaya to office;

5) Calls for extensive international observation of the November 2009 elections once President Zelaya is returned to office to ensure that his successor is elected freely, fairly, and transparently.

6) Welcomes the mediation of Costa Rican President Oscar Arias and encourages the Obama Administration to provide any assistance President Arias requests in his efforts.

There is no doubt that economic sanctions would have an effect on the country and its de facto rulers. Interviewed on Telesur, Honduran Ambassador to the UN Roberto Quesada warned that Honduras was heading for an “economic abyss” due to sanctions against the coup.

“Honduras has been struck by two huge catastrophes,” he said. “Mitch and Micheletti.” Hurricane Mitch hit the country in 1998, causing death and an estimated $3.8 billion dollars in damages.

Despite the hardships that sanctions would imply, more and more members of Honduran human rights organizations, the Zelaya government and the international community are speaking up in favor of sanctions to bring the coup leaders to mediation with viable proposals.

If the U.S. government does not decide at once to back up its positions with stronger consequences, its endorsement of the mediation process will ring hollow in international circles and continue to be ignored by the de facto regime that has entrenched itself against constitutional rule of law in Honduras.
Posted by Laura Carlsen at 11:41 AM