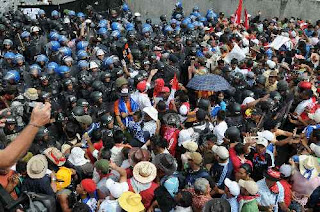 The moment President Zelaya's plane came into view in the sky over the Toncontin airport, two things happened: tens of thousands of demonstrators awaiting Zelaya broke out in cheers to welcome it, and the Honduran armed forces mobilized on the landing field to prevent it from landing. In the fading light of dusk, the plane circled the landing strip several times. Then the voice of the president came over the airwaves.

Interviewed by Telesur, Zelaya said the control tower informed the pilots that air space was closed to all but military planes. The military vehicles parked on the runways made landing impossible. "I'm doing all I can do," the president lamented. "I'm in the cockpit and the two pilots are doing everything possible." He added, "If I had a parachute, I'd jump out of this airplane right now, but we can't land."

Of course, none of this was unexpected. The coup government had announced that it would not permit Zelaya's plane to land. The president announced he was coming back anyway. Both sides braced for the showdown. As demonstrators got close to entering the airport, security forces opened fire. Two were killed.

The plane carrying Zelaya, UN president Miguel D'Escoto and others, then flew to Managua, where Zelaya met briefly with President Daniel Ortega and on to El Salvador where Presdients Correa, Kirchner and Lugo, along with OAS Secretary Jose Insulza, awaited him.

First, Zelaya´s return today was meant to be just that—the return of the democratically elected president to his country and his presidency. But it was also meant to measure forces. Opposition to the coup has been seriously under-represented in the media. In Honduras since the coup, most of the media is either controlled by interests involved in the coup, censored or shut down altogether. Grassroots organizations that support Zelaya were also having difficulties traveling to Tegucigalpa. Military forces shot out the tires of their buses and set up checkpoints in many parts of the country. An undetermined number of anti-coup leaders have been arrested en route.

By nearly all reports, tens of thousands of Hondurans gathered in Tegucigalpa to march to the airport. They marched non-violently, as police and military units filled the streets. This was by far the largest demonstration against the coup since the president was kidnapped and the coup government installed on June 28--one very long week ago.

The sheer size of the demonstration today sent a strong signal to all sides. The crowds proved that President Manuel Zelaya has a solid base of support and his supporters are willing to risk their lives to assure his return. The coup´s message that Zelaya had alienated himself from all sectors of Honduran society fell flat as soon as the images and interviews of the march began broadcasting. Since the demonstrators marched unarmed and peacefully, it also showed that they were able to mobilize with discipline and adherence to non-violence. This undercuts any effort to portray pro-Zelaya forces as weak, violent or both.

A second message came out of the press conference held this afternoon by the coup government. In the conference, members of the directive of the coup sent out contradictory messages that left one with the impression of disorder in the ranks. They indicated a willingness to engage in dialogue with the OAS, saying they would welcome an OAS delegation in a declaration read by Martha Lorena Alvarado de Casco. But they also rejected outright any solution including the preconditon set by the OAS—the reinstatement of Zelaya. Coup members criticized the regional organization, saying that Honduras would not accept outside interference and complaining that the OAS was meddling.

By blocking the plane where Zelaya and the UN president of the General Assembly were traveling, the coup again demonstrated the frank disdain for international law and multilateral diplomacy that has characterized its actions.

Third, diplomatic efforts are beginning to show signs of the bicycle syndrome--if it doesn't move forward it will fall. The demands are clear and the world's nations have reached consensus: condemnation of the coup and the reinstatement of President Zelaya. But this coup, for reasons that still aren't entirely clear, seems to be immune to international isolation, reason, political consequences and legal arguments.

Since the thwarted landing, some media has begun to push negotiated solutions that do not recognize Zelaya's presidency. This represents backsliding from the global consensus. Proposals such as pushing up the elections while leaving the coup government in place, shouldn't even be circulating at this point. Canada's jarring proposal at the July 4 OAS meeting to review the circumstances of the coup also represents a step backward, since the OAS Secretary General has been doing precisely that for several days. Both a "senior administration official" and the Canadian representative of the OAS expressed views that Zelaya should not return to his country now. Although the Canadian ambassador to the OAS voiced concern for the Honduran president's safety, their comments also hint at a dangerous willingness to allow the coup to survive for at least a while longer.

Diplomatic efforts must move forward from the current position by stepping up pressures on the Honduran coup. The next step is economic sanctions. And on that one, the world's largest economy, Honduras' major trade partner and source of foreign income, the United States holds the cards.

Zelaya explicitly recognized this. After turning back, he stated, "Starting tomorrow, the United States, which has tremendous power, should take action."

"Specifically, the strongest government in economic matters, in aspects of the sphere of the dollar, for us is the United States. If they decide to live with the coup, then democracy in the Americas is over... In this sense, I ask the powers that have economic and commercial influence to apply measures when legitimate institutions of society side with barbarity and terror to commit abuses as in Honduras."

Zelaya had previously thanked the United States for its condemnation of the coup. In his latest comments he did not mention specific actions that the U.S. should take, although he was clearly referring to some form of economic sanctions.

The Obama administration has so far been silent on that point.

The deaths of unarmed protesters at the airport add murder to the long list of the coup's political crimes. Polarization in Honduras is increasing, both sides are retrenching. The coup accused Nicaragua, Cuba and Venezuela of intervention and blamed the violence on demonstrators. Many believe that Zelaya will attempt to return again today or tomorrow. He has reiterated his intention to return but not said exactly when or how.

Meanwhile, international diplomacy is at a critical crossroads. The United States could backtrack and opt for a path of trying to prevent Zelaya from returning immediately, waffling on its rejection of the coup and delaying sanctions. Or it could move firmly forward in applying the needed sanctions and sending a strong message to the coup that its very existence is an affront to civilization in the 21st century and a threat to democracy and security in the hemisphere.

President Obama is being briefed continuously on the situation as he travels to Russia. The multilateral strategy up to now has been effective in creating consensus but not so effective in bringing results. The OAS resolution to suspend Honduras left the issue of economic sanctions to each nation to decide. Now is the moment for strong U.S. action.

The State Department will undoubtedly issue a statement today clarifying the U.S. position on what comes next. That statement must include concrete actions to add teeth to the diplomatic sanctions established up to now.

Statement of Pres. Zelaya on his Return Tomorrow, Calls for Non-Violent Demonstrations
http://americasmexico.blogspot.com/2009/07/statement-of-pres-zelaya-on-his-return.html