A Military Coup is Violence; A President's Return is Restoration of Constitutional Order 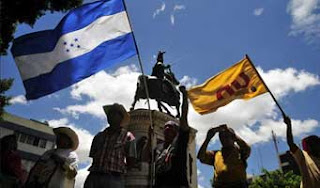 The capacity of the press and politicians to twist reality never ceases to amaze. In recent days, powerful interests in both these camps have attempted to spin Honduran President Manuel Zelaya's planned return to his homeland as a provocation of violence for which he, and only he, will be responsible.

Why would there be violence if an elected president returned to the country he governs?

Those who are carefully preparing the script to exonerate acts of the coup and blame the president and the Hondurans who accompany him for any violence the Armed Forces should inflict on them are hoping we have already forgotten that part. The June 28 military coup forcibly exiled President Zelaya to Costa Rica, setting him on a 27-day peregrination to every major international forum in the hemisphere. He has garnered a long list of resolutions and declarations calling for his immediate reinstatement, representing unanimity among the nations of the world to support his return.

As Zelaya prepares to enter Honduras from Nicaragua, thousands of supporters are gathering at the border to receive him. They carry no arms and have proven over the past weeks their commitment to non-violence, even when under lethal attack by soldiers. They have had to scrounge up the money to make the trip in a nation where 70% of the population lives in poverty. They have had to pass military checkpoints established to restrict freedom of movement, where they are harassed and the tires of their rickety buses are shot out.

The U.S. State Department has been dodging the application of stricter sanctions and calling for commitment to the mediation process despite its evident breakdown. Secretary of State Clinton and State Department spokespersons have said the United States does not support Zelaya's return. Phillip Crowley went on to imply that Zelaya would be responsible for violence should he decide to return. In response to a direct question regarding the president's return, he replied "Any step that would add to the risk of violence in Honduras or in the area, we think would be unwise."

The Coup's Monopoly Hold on Violence

Violence doesn't just materialize in a given situation. There are those who perpetrate it and those who suffer the brunt of it. Each individual makes a personal decision and bears a personal responsibility. Zelaya recognized that in appealing to Honduran soldiers serving the coup:

"I also want to address the Honduran army," he said from the Nicaragua border yesterday. "Dear Honduran soldiers, do not point your rifles against the representative of the people, against the people. Those rifles are meant to defend the people, not attack the people." Zelaya stated that his side will cross with "the flag of peace."

In fact, the violence in Honduras since the coup is remarkably one-side. There is not one case of security forces killed by protesters. The International Human Rights Observation Mission in Honduras released a report this week documenting five murders of opposition members by coup security or irregular forces. The report cites paramilitary activities, threats, the suspension of civil liberties, arbitrary deportations, threats and attacks on media outlets, and a lack of effective recourse for the protection and exercise of human rights in the country. It concludes, "The International Mission corroborated the existence of grave and systematic violations of human rights since the coup d'etat." The report recommends a series of trade and diplomatic sanctions.

The Perils of Playing the Waiting Game

The shadow of the military coup has been cast throughout the entire country. There's a sunset curfew in place along the frontier lands where Zelaya plans to cross the border. No man, woman or child is allowed in the streets after six o'clock. In this situation, it is understandable why Hondurans have lost patience with the mediation process.

Meanwhile, the U.S. State Department has insisted that Zelaya wait out a stalled mediation process led by President Oscar Arias of Costa Rica. Zelaya attended the first round, when coup leader Roberto Micheletti packed up his cards and went home, blocking any possible agreement. At the second round last weekend, Zelaya delegates agreed in principle to an Arias proposal and the coup once again vetoed it. On Wednesday, Arias made yet another proposal. The main point—the return of Zelaya to power—was rejected again in statements yesterday by the de facto foreign ministry.

Reuters reports that although the latest proposal is supposedly being examined by the de facto regime, its foreign minister Carlos Lopez, said Zelaya's return was "not negotiable." The coup has vowed to arrest Zelaya if he enters his country.

Lopez added, "It is not the talks that failed, but the proposal." The distinction is patently absurd, since the return of Zelaya has always been the first prerequisite for a solution in the talks and is contained in every international resolution on the conflict.

This has even Arias, who has tried to appear optimistic about the mediation, exasperated. He said on Wednesday "It [the coup] is completely isolated. They have become the North Korea or the Albania of Central America," and said it was time for them to compromise.

So what exactly should the world be waiting for? And why should it leave the timing for the restoration of democracy left in the hands of the same coup leaders who shattered it in the first place?

This not only does not make sense, it is extremely dangerous. Every day that goes by, shows signs of the consolidation of the criminal right. The coup has presumably spent millions of dollars (lobbyists like Lanny Davis don't come cheap) in public relations to influence Congress and public opinion but probably even more importantly to galvanize rightwing and business support.

Now Republican congressman Connie Mack has stated he will be leading a delegation to Honduras to talk directly with the Honduran "government." He reiterated that he does not believe the expulsion of President Zelaya was the result of a coup d'etat. A small group in the U.S. Congress has been working hard to push against the consensus of the international community to assert the supposed legitimacy of the coup. The press reports that coup leaders met with rightwing President Uribe in Colombia to build alliances. The Colombian government later denied reports that it had offered its support.

The situation grows more volatile, not because of Zelaya's planned return but because each day is another day of confrontation, another day of military rule, another day of human rights violations. Both sides are growing in strength and growing in determination. In this context, the sooner Zelaya is restored to power, the better.

The Criminal Right and the Obama Ultimatum (Jul 13, 2009)
http://americasmexico.blogspot.com/2009/07/criminal-right-in-honduras-and-obama.html

Posted by Laura Carlsen at 7:13 AM