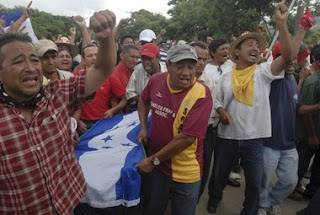 Honduras' military coup has murdered two demonstrators in the border area of Honduras, federal congressman Cesar Ham reported on Jul 25. The human rights organization, the Committee of Families of the Disappeared in Honduras (COFADEH) and other sources report that the body of Pedro Mandiel Muñoz was found with signs of torture following his arrest by coup security forces in Alauca, near the Nicaraguan border. Supporters of President Zelaya´s return are gathering there despite a military state of siege in the region. The organization notes that this brings the tally to six confirmed assassinations of Zelaya supporters.

As I am listening to the live transmission of the funeral over Radio Globo, the scene turns from somber to mayhem. The Radio Globo reporter at the funeral begins to run from the scene. The crowd has identified and captured armed police infiltrators, interrupting the burial. The fear in the voices is palpable. Radio Globo is calling for people to avoid violence despite the pain and rage, to deliver the police to justice. They report that a third police infiltrator has been captured. All you can hear is shouting as some seek to attack the infiltrators. Rafael Alegria exhorts to the crowd, "Our movement is peaceful... Do not attack them. We are going to remove them and deliver them to justice."

The police infiltrators have been taken into custody and disarmed. Alegria gives the names and says that the police are from the Direction of Criminal Investigations. "Who would send them into a burial when the people are already indignant..?", he says. "Our movement has proved that it is completely peaceful. We are protecting them so the people will not mistreat them even though we do not receive this treatment. This is a humane movement."

Alegria continues. "This is a direct provocation of the movement... We don't want any kind of confrontation."

Listening to the direct transmission, it is one of the most moving broadcasts I have heard. The reporters and interviewees are out of breath, and the calm voice of Rafael Alegria comes across, controlling the situation. Imagine the scene to get an idea of what this movement has accomplished at this very moment—in the burial service of a murdered countryman, they are forced to flee, leaving the coffin unburied, when armed police infiltrators are discovered. There is clear potential for a lynching. And it is controlled by experienced, committed, non-violent leaders that have the full respect of the people.

As Zelaya prepares to re-enter the country from Nicaragua, the entire zone is under 24-hour-a-day curfew and convoys of supporters have been blocked at over twenty checkpoints between Tegucigalpa and the border. AP reports,

"The Honduran armed forces, under orders from the de facto government, block the advance of Hondurans attempting to reach the border to meet Zelaya. The highways are infested with checkpoints and barricades. Some groups have evaded the checkpoints to reach their destination."

Many people, including Rep. Ham, have taken up the journey on foot. Radio Globo reports between three and five thousand supporters are gathered near the border.

Alegria himself was a victim of this repression just Saturday when the coup arrested him near Danli, despite cautionary measures issued for his safety by the Inter-American Court of Human Rights. He was detained and then released due to pressure from the national and international community.

Desperation and Resistance
Alegria's arrest is emblematic of the attacks on movement leaders by a coup desperate to maintain power in the face of a popular uprising for a return to democracy. As a national leader and former International Secretary of Via Campesina, he coordinates growing global opposition to the coup and represents the determination to continue to oppose the military coup of thousands of Hondurans despite mounting risks. For the armed forces to detain a prominent national and international leader who was engaged in non-violent, unarmed protest and the exercise of freedom of expression and freedom of movement demonstrates the true face of the group of army and political leaders who simultaneously seek to convince the international community of the "legality" of their cause.

Alegria's arrest also demonstrates the hypocrisy of the coup's participation in mediation efforts led by President Oscar Arias in Costa Rica. He participated as a civil society member of the Zelaya delegation before talks broke down and he returned to rejoin the movement in Honduras.

Those talks have failed given the refusal of the coup to agree to the return of Zelaya. Representatives of the Armed Forces were in Washington on a lobbying tour at the same time the protester was killed on the border. Some media including an article by the New York Times reported that the Honduran army is ready to accept the San Jose accords proposed by President Arias in Costa Rica. The actual communique is not that clear—the first point notes it's subordination to the coup leaders who have rejected the terms of the San José proposal. It lists the following points:

1. The Armed Forces are respectful of the Constitution and the Laws, for which we reaffirm our subordination to the civil authority in consequence with the principles of legality and obedience.
2. As an institution we support a solution to the problem in our country through a negotiation process in the framework of the San José Accords. Likewise, we reiterate our unconditional support for the results, in conformance with our Constitution and Laws.
3. The Armed Forces as a national institution complies with and will continue to comply with the missions that are mandated in the Constitution and Laws of the Republic.

The only real sign of softening from the Army came in an interview with Gen. Romeo Vasquez who said that the armed forces "cannot fire on our people."

Pro-democracy forces are not so sure, given the deaths so far. They also reported a bomb explosion near the site of the funeral that fortunately did not wound any of the thousands of supporters who had already left for the burial. Juan Barahona told Radio Globo, "The only ones responsible for this are the police." He added that "This is part of the repression against Hondurans so they will not participate in the struggle against the coup... But tomorrow there will be more resistance, we are not going to abandon this struggle. We are going to take more security measures."

Radio Globo also broadcast testimonies from among the 55 men and 25 women arrested yesterday morning in the militarized border zone. They reported being beaten and humiliated by security forces, with several women reported being stripped naked. In Tegucigalpa, individuals gathered to form a caravan of humanitarian aid to the border area denounced an unmarked car that was making regular rounds and pointing a rifle at the crowd.

As things heat up and the movement grows stronger and more determined, Washington remains silent except to scold Zelaya and call for a return to talks that are not happening. Rightwing members of Congress led by Florida Rep. Connie Mack arrived in Honduras to implicitly recognize the illegal coup. These members have broken with the mandate of official U.S. government resolutions in the U.N. and the OAS to denounce and refuse to recognize the coup and support the immediate return of President Zelaya. Their visit is a rogue act and should be roundly condemned by the U.S. Congress and the Obama administration.

Lawyer Carlos Montoya stated on Radio Globo that the Miami-based right seeks to undermine the position of President Obama and is using Honduras as a "guinea pig" for actions to block pro-democracy movements in the hemisphere. "This coup creates a terrible precedent for the world... In what conditions does this leave countries with recently elected presidents, like El Salvador, or African countries in processes of democratization? Obama will not tolerate a regression in democratization of the world."

"I think she has to be given the correct information so that she comes to see what is happening in Honduras and her words are to complain about the coup leaders, not the heroic people that are resisting and accompanying me so that things return to normal," he said.

Given the rise in deaths, threats and human rights abuses, the situation cannot be allowed to continue. Honduran grassroots organizations have demonstrated their commitment to non-violence and their determination not to give up. They have asked the U.S. government to cut off the coup before more people are killed. The United States must respond immediately to their pleas.
Posted by Laura Carlsen at 5:10 PM