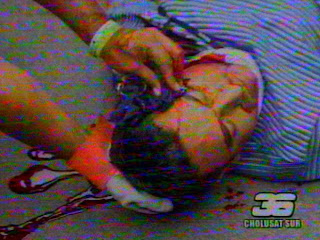 In an interview yesterday, I described the three stages of the coup so far. Stage one began with the immediate response of the international diplomatic community in condemning the coup d'etat in Honduras and supporting the immediate return of President Manuel Zelaya. Zelaya appeared before the Organization of American States, the United Nations, Central American and South American integration groups and received universal backing.

Many of us thought that this unanimous condemnation could break the coup, especially when the colossal of the north, the United States, weighed in against it. How long could the coup leaders last, iced out of the international system?

The answer turned out to be much longer than we expected and way longer than we hoped. The coup has gone into its second month. Either the diplomatic sanctions were not strict enough or the coup leaders have hidden sources of support that have led them to believe they can buck the rest of the world.

Both of these explanations are demonstrably true, and we can add to that a high dose of delusional thinking on the part of de facto regime that does not seem to understand its own dilemma. As documented here before, international rightwing forces have backed the fall of Zelaya since before the coup and continue to provide expertise and likely considerable financial resources. U.S. so-called "democracy promotion" programs including the National Endowment for Democracy, USAID and the International Republican Institute have also funneled large amounts of cash to Zelaya opponents. The Honduran oligarchy controls a huge percentage of national wealth and now has exclusive control over the national budget. Given the high degree of corruption in the country as a whole, it probably has some more shady sources as well but that remains on the docket for further investigation.

Sanctions by the U.S. government have so far touched only a small percentage of aid to Honduras and although joint military operations have been cut off, the School of Americas Watch reports that the school continues to train Hondurans and there have been no changes in operations at the Palmerola military base where the U.S. has military personnel. Freezing assets of coup members or applying trade sanctions have not even been discussed openly.

The second stage was the mediation promoted by Secretary of State Hillary Clinton and led by Costa Rican President Oscar Arias. This stage has ended in failure as well. After Arias proposed a seven-point plan, the coup rejected the main point of Zelaya´s return. The coup announced that it would come back with an answer on Monday. Dilatory practices that end in more refusals have been standard coup behavior since the talks began.

Moreover, Zelaya´s return to office is not the only issue in mediation. There exists the problem that the State Department seems to favor a plan that will curtail the constitutional powers of the president.

"President Mel Zelaya is right to refuse to be delivered back to his presidential chair, trussed and bound like a capon, an impotent symbol of a democratic façade."

"If Secretary of State Clinton permits the coup regime to impose conditions on the return of the constitutional president, then she damages, perhaps irreparably, the OAS, and breaks faith with Oscar Arias who thought he had her unequivocal backing."

Americas Program on-the-ground writer in Honduras, Dick Emanuelsson just sent in a long report on the current situation in Honduras that combines interviews and eye-witness descriptions, history and analysis, and an understanding of the country that comes with years of living in Tegucigalpa and reporting for news agencies throughout the world on that troubled corner of the earth. We are currently translating it in its entirety for these pages.

Here is part of an interview with Marvin Ponce, congressional representative of the Democratic Unification Party and a member of the delegation that Zelaya selected for the dialogue in Costa Rica with Arias. Ponce met with State Department officials in Washington. Here he expresses his lack of faith in Arias and the mediation process.

“Oscar Arias is an enemy of social movements and has played a sad role by dragging out the process and proposing an agenda of seven points even though he is not a negotiator and even discarding the popular consultation, which was the reason for the coup...”,

"They (the coup leaders) have the arms—not only the military but also the communications media. We have broken the media blockade of the right and the groups in power, and you can see how the people have been mobilizing all this time without giving in.”

"We went to Washington to demand a stronger role of the United States that practically displaced the OAS; it took over the process and took it to Central America and to Arias where it became a sterile dialogue, meant to go on and on to wear out the president, the citizenry and give more force to the coup and practically converted the coup into a valid counterpart. The biggest mistake of the president was to sit down and dialogue with the coup. However, he believed that after talking with Hillary Clinton everything would end in two or three days because the mediation would have been an ultimatum to the coup to give up power."

“The first meeting with Arias was a failure. The second also, and the third brought in this other agenda. The coup leaders now say that they are taking the proposal to the national congress and the Supreme Court to consult—this is a bureaucratic way of buying time. Now the Obama administration is telling Zelaya not to go to Tegucigalpa but to Washington. The U.S. is playing a sorry role and in the end is playing to the coup because they do not want a concrete solution to the problem."

“When we were in Washington, the representative in charge of Central America in the State Department told us that they were doing a legal study to decide whether or not there was a coup in Honduras. That's why we say that the people do not want to submit to national or international coup supporters.”

Ponce believes the mediation is weakening regional efforts at ending the coup.

"The Secretary General of the OAS, Jorge Miguel Insulza, arrived in Tegucigalpa the third day of the coup just to advise the coup leaders that they had to give up power to the ousted president Zelaya. Now he has a low profile and suggests that Zelaya should not go back to his own country, in recognition of the Costa Rica agenda."

Honduran social organizations have rejected the failed mediation and we have entered the third stage of the drama, where growing popular resistance faces off with increasing repression. The potential for more violence grows each day, as shown in the terrible attack on demonstrators in El Durazno, Tegucigalpa yesterday (see photo).

This doesn't mean that other stages are closed off completely. Latin American organizations have begun efforts to increase pressures. Members of the Mexican Congress called on President Felipe Calderon, who is the current president of the Rio Group, to call a meeting of that group to step up pressure. But he too has bought into the failed mediation and refused .

Mark Weisbrot of the Center for Economic Policy research, writing for the Guardian says,

"Latin America gave Washington a chance to use its influence with the Honduran elite to restore democracy there. It didn't work. Now it is Latin America's turn to take the lead. Hopefully, Washington will follow."

Perhaps it will be a combination of renewed diplomatic efforts and the popular movement that finally restores constitutional order in Honduras. For now, the latter is on the forefront and deserves total international support for its efforts to end the impasse before more people are killed and wounded by a coup desperate to retain power gained against all conventions of international law and human decency.
Posted by Laura Carlsen at 12:36 PM