In Mexico, Zelaya Criticizes "Weakness" of the International Community 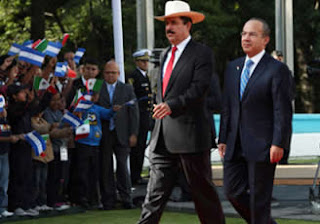 President Zelaya spoke to hundreds of Mexican supporters in Mexico City on August 5, to affirm his commitment to restore democracy in his country and underline the importance of the Mexican and U.S. governments in ending the coup.

The Mexico City government, which earlier presented Zelaya with the keys to the city, organized the event with members of grassroots organizations. Hundreds of men, women and children from the urban popular movement, debtors' organizations, unions and universities waved Honduran flags in the elegant Teatro de la Ciudad, frequently breaking into the speech to shout cheers and slogans. The setting contrasted sharply with the international diplomatic forums he has appeared in since being ousted by a military coup on June 28.

Zelaya said, "Our people have the right to resist repression with all the arms of our democratic system but also peaceful insurrection... Patience has limits—I'm advising all the recalcitrant right from Washington to Tierra del Fuego." At the same time he reaffirmed that theirs is a "peaceful, civic and tolerant struggle, but patience is running out."

"International solidarity has been extraordinary against the coup but we think that it is insufficient. There is still more to do in the international arena to build support, to repudiate this event that has shamed our country, but with the shame falling on the shoulders of the groups that exercise illegitimate power."

In one of his most political speeches, Zelaya detailed the achievements of his government in growth and raising the minimum wage, saying that despite the advances, the elites "didn't want to share."

He explained the principle of "poder cuidadano"—citizen power. This principle combines two concepts, he said, empowerment and citizenship. He went through the conflicts leading up to the coup, particularly the decision to consult the population on voting in November elections on whether to convoke a Constitutional Assembly. He noted that the law of citizen participation gives the people the power to be consulted on major decisions and was a critical step to "pass from a representative democracy to a participatory democracy."

"A president can't resolve the problems of the country alone. You need the large majorities, to listen to them, not just in elections—you need to listen to them in decisions. The people aren't just there to elect, but also to decide... on development plans, on international trade treaties..."

He told the audience that the economic and political elite "erred in every sense of the word. They were wrong about the people—they thought the people wouldn't resist like in the last century. They were wrong about the country—Honduras is no longer willing to put up with a return to arms... They got the wrong century—they don't realize that in the 21st century, the citizens of the world have a different awareness, different training" and that "we have a humble people, often vulnerable, but determined to struggle for guarantees of their constitutional rights, their human rights and their universal rights."

"And they were wrong about the president." Zelaya said the coup offered him money to stay in exile, which he refused. He plans to return to the border with Nicaragua to prepare to return to Honduras.

Later Zelaya revealed that the head of Honduran Armed Forces, General Romeo Vasquez, called him in Nicaragua. In the conversation, Zelaya said Vasquez told him, "'Mr. President, we received instructions that you were to be eliminated in the capture (eliminated meaning assassinated). And we decided then, the Joint Command, that are your friends (Zelaya paused to question the term friends) that to preserve your life we had to take you out of the country.'"

Zelaya told the audience, "I'm telling you this because the radical positions of the traitorous right came to this extreme."

Zelaya both affirmed the role of the international community in ending the coup while pointing out that the persistence of the coup in power in Honduras demonstrates its "weakness" and the need for a stronger U.S. leadership role.

"I recognize the force of the international community. When Sec. Hillary Clinton proposed Oscar Arias to me, I agreed because I wanted the U.S. to play a leading role."

"Many of the fundamental actors of the coup d'etat in Honduras did not come out of the government of Barack Obama but did come from the hawks in Washington who promoted them." He gave the specific example of U.S. congressional representatives "who have said publicly that the coup is good because it halts the social reforms of President Chavez, President Morales, Rafael Correa and Daniel Ortega in Central America."

But he went on to express his frustration at the mediation process. "I think that apart from the good-faith efforts of Pres. Oscar Arias, who won a Nobel Peace Prize, they have treated the coup with kid gloves. This is a good time to clamp down."

"If President Barack Obama really wants to turn back this coup, these coup leaders will last all of five minutes because the economy of Honduras, all our military, commercial and migration activities, depend on the United States." Emphasizing how the Honduran coup is a test case for the new government, he added, "We'll see the extent of his sincerity, force and democratic conviction."

Zelaya announced that he spoke with Mexican President Felipe Calderon who offered his support. Calderon received the ousted Honduran president with full state honors yesterday. On this point, Zelaya had a tough audience. At the mention of the Mexican president's name, the crowd broke out in boos that scarcely let him continue. The uproar revealed the still-simmering resentment against what many people in this country, especially the poor and popular organizations that filled the theater, still consider the elections of 2006 to have been stolen and see Calderon's leadership as an illegitimate presidency.

Zelaya continued anyway. "[Calderon] will be with President Obama in Guadalajara and the force with which the United States decides to take effective actions will also depend on this meeting." On August 9, Obama will be in Mexico for a meeting of North American leaders on NAFTA's Security and Prosperity Partnership and other issues. He said that Mexicans must keep a close watch on the talks between Calderon and Obama, because they will have an impact "on the destiny of Latin America."

Courting Calderon to intervene with Obama is a strategic move at this stage of defeating the coup. Zelaya openly referred to something Washington insiders have been saying as the world tries to pinpoint what has seemed a vacillating position within the Obama administration. With U.S. forces consolidating in favor and against the coup and a marked difference in tone between the president and his Secretary of State, many have emphasized the major influence of the U.S.'s two most powerful allies in the region—Mexico and Brazil—in deciding to soften or strengthen pressures against the coup. There are powerful interests close to the government that prefer the coup to Zelaya, but one thing the Obama administration does not want to do is alienate these two countries.

Following the meeting with Zelaya yesterday, Calderon confirmed support for the Arias mediation process and asserted his "full support for restitution and pacification."

His remarks send a message to Washington but fall short of Brazil's position. Brazil has already come out saying there should be no conditions set on Zelaya's return and that any concessions to the coup in the framework of the mediation process would encourage further coups in the region. This contrasts with the Arias proposal to form a coalition government including coup supporters.

Nearing the end, Zelaya noted the strength of the Honduran resistance. "Today I want to express my solidarity with the Honduran people. We are 37 days into a teachers' strike... It's not just to protest the coup—what the teachers say is that they can't go to the classroom to teach the children how coups are made, they want to teach them how to revert coups d'etat in the streets."

Honduran organizations are now on the frontline of the battle to defeat the coup in their country. Zelaya noted the determination of unions, women and workers in carrying out more than 100 peaceful civilian road blockades and called on the international community to support Radio Globo, almost alone, he noted, in reporting on repression by the coup and currently facing closure by the coup regime that controls the media in the country.

To the enthusiastic crowd, Zelaya framed his dilemma as a struggle without borders. "When the struggle is for a value, a principle, there are no borders, there are no countries."
Posted by Laura Carlsen at 2:33 PM