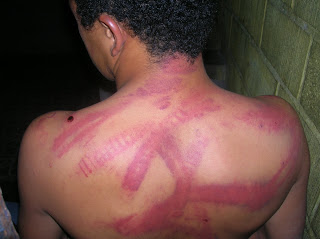 The Honduran coup has dropped all pretenses of legality over the past few days as it enters into a phase of desperate repression since the return of President Manuel Zelaya on Sept. 21 and the surge in grassroots mobilization against the coup.

The resistance march yesterday reported many detained, beaten and chased. Photos reveal the brutality of the torture that arrested demonstrators have undergone. Neighborhoods in Tegucigalpa report that military tanks have been moved in to break up groups of protesters. The Armed Forces have threatened movement leaders and are targeting teachers and youths.

But no-one knows how long that will last since the regime depends on repression to maintain power. It also means more people will be in the streets and subject to arbitrary arrest and beatings. Demonstrations in Tegucigalpa have grown daily despite the curfews, road blocks and repression. Neighborhoods throughout the capital city and in many other cities are organized and carrying out daily protests.

Jessica Sanchez of Feminists in Resistance, just sent in this account of how the police are even raiding hospitals to capture wounded demonstrators after beating them:

"I just got back from the hsopital where I took my brothers who were arrested by the police after the march and savagely beaten, while the police screamed that this way they would learn not to go around in marches and that Mel couldn't save them from a beating. One of my brothers (21 years old) has bruised lungs from the beating and the other has two broken hands... They also detained several compañeras from Feminists in Resistance who were later released because they were carrying their identification as part of the Women's Human Rights Observatory. What seems incredible to me is that the police are taking people (mostly youths) from the hospital... They are going into the hospitals every two hours, to see who they'll take out. WE CAN'T ALLOW THIS! The Red Cross hasn't done anything, but there are nurses and members of the resistance inside the hospital who helped us a lot."

We have received reports of persecution by police on motorcycles, hunting down protesters like animals. An eight-year old boy became the latest casualty—not coincid 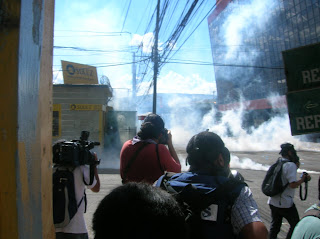 entally, all on the side of the people against the coup—when he died yesterday of tear gas asphyxiation.

Juan Almendares, of the Honduran Center for Torture Prevention, reports that Honduras has become "the largest prison in the world." He notes, "There is a permanent state of siege here. Human rights organizations and medics are not even allowed to attend to the tortured and wounded. The office of the Committee for Families of the Disappeared was bombed with tear gas... Children and the sick in the hospitals are undernourished since with the curfew, which is a death warrant, they do not receive food and are dying of hypoglycemia."

These facts are not disputed and have been corroborated and denounced in recent days. Amnesty International called the situation "alarming" and called for the de facto regime to "stop the policy of repression and violence and instead respect the rights of freedom of expression and association." The organization added, "We also urge the international community to urgently seek a solution, before Honduras sinks even deeper into a human rights crisis." The Inter-American Commission on Human Rights has requested permission to send an emergency delegation.

In developments in the international arena, Brazilian President Lula da Silva used his address to the UN General Assembly to call for the immediate reinstatement of President Zelaya, who is still holed up in the Brazilian Embassy in Tegucigalpa.

"The international community demands that Mr Zelaya immediately return to the presidency of his country and must be alert to ensure the inviolability of Brazil's diplomatic mission in the capital of Honduras," he stated.

International organizations have joined the Brazilian government in calling for action from the UN Security Council (see letter below). UN Secretary General announced that UN support for the Honduran elections scheduled for Nov. 29 and has been suspended due to the lack of minimum requirements for "credible elections" under the coup. Anti-coup forces have vowed to boycott the elections and Panama's new rightwing government is alone in claiming it would recognize the results.

The situation has reached all-out crisis proportions. Urgent action is needed from everyone who believes in democracy, and seeks to stop the bloodshed and avoid the terrible precedent of rule by force in the Hemisphere.

2. Send organizational endorsements to the UN Security Council below to:
Posted by Laura Carlsen at 1:45 PM