The Sound and Fury of the Honduran Coup: Acoustic and Chemical Attacks on Brazilian Embassy

We have received many reports today of the use of sonic devices and chemical warfare in attacks on the Brazilian Embassy by the Honduran coup. The use of Long Range Acoustic Device (LRAD) has been confirmed by observers and journalists, who report that the devices are being installed throughout the area. Numerous photographers have also documented their use.

The UN Security Council today called upon the de facto government of Honduras to "cease harassing the Brazilian Embassy" and "condemned acts of intimidation." (See photo above: the caption on the first photo of the LRAD reads "State-of-the-art Israeli artifact used in repression and torture that causes damage to the ear and loss of equilibrium. What President Zelaya denounced from the Brazilian Embassy.") The second photo (below) shows the installation near the Embassy. 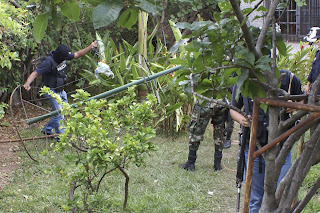 These devices are described as a "non-lethal weapon" produced by the U.S.-based American Technology Corporation. They emit painful sound at 151 db. with a range of 300 meters on land, and are used in situations of war and to control demonstrations.

While acoustics weapons have been used over the past several days, today the Armed Forces actually began to spray the Embassy with poisonous gases and by some accounts pump them into the building through the drainage system. The Honduran News Network reports that First Lady Xiomara Castro de Zelaya climbed a ladder to ascertain the source of the attacks and was sprayed with chemicals. She and others in the Embassy are reportedly bleeding profusely as a result of the effects of the chemicals.

Father Andres Tamayo described the situation to Radio Progreso, "Over a thousand soldiers in front (of the Embassy) left and returned with a cistern and helicopters spraying gases. There are also neighbors that lent their houses to spray these substances and house the military. They have placed pipes to spread the gases. We feel a tightness in our stomachs and throat, vomiting, dizziness and some people are urinating blood. There are more than a thousand people around here and at this moment all we can do is drink a little milk."

A press conference was called to reveal the results of the analysis of the gas, done by public health specialist Dr. Mauricio Castellanos.

The report concluded, "This mixture is a purely military technology, prohibited under international treaties. Exposure for a prolonged period is lethal to any living organism."

"The occupants of the Brazilian Embassy that accompany President Manuel Zelaya Rosales, his wife and family, communities and protesters are the object of the launching of chemical arms from helicopters and airplanes or on the ground troops and the use of sophisticated sound and electromagnetic equipment that have produced severe diarrhea, vomiting, nasal hemorrhages and gastrointestinal problems in both the Embassy and surrounding areas."

"According to the clinical reports, this could be due to the usage of toxic substances including: pesticides, chemical components of gases, radioactive substances like radioactive cesium and toxic mushrooms."

"It is urgent that an international medical team from the United Nations and the World Health Organization be sent. We are facing an irregular war against the people of Honduras. The Armed Forces do not allow the International Red Cross entry into the Brazilian Embassy, violating all international health treaties and conventions and human rights."

This is the notorious "day-after" effect of nuclear bombs. The agency adds that "it is reasonable to expect that individuals exposed to high levels of radiation from a source of radioactive cesium will develop the same types of cancer observed in survivors of the atomic bombs in Japan."

As described in the Sept. 22 blog, embassies are protected under the Vienna Convention and any violation of this is an international issue. With the notable exceptions of Colombia and the United States, all nations of the region expressed concern about the Honduran situation at the 64th UN General Assembly meeting.

As the society breaks down into a coup-provoked crisis, the Women's Collective CODEMUH writes that workers in offshore assembly plants have been forced to work overtime to make up for time lost due to the coup's curfews, in clear violation of labor law.

The Collective notes, "According to Article 23 of the Labor Code, ‘Workers can participate in profits or benefits of the boss, but never assume the risks and losses,’ meaning that business cannot charge workers for the losses caused by the national political crisis, which the businessmen and women are key actors in causing. Ladies and gentlemen, you cannot force workers to pay for the losses that you provoked with the coup d'etat.”

"We call on transnational brands like Nike, GAP, Adidas, Hanes, HBI and Walmart, among others, as well as university students in the U.S. and consumers in general, who wear the products produced in the sweatshops of Honduras, to demand the offshore industry pay its workers for the days they did not show up for work due to the curfew of the de facto government, without requiring that they make up these days. And that the workers refuse to accept these extra days."

President Zelaya has called on “the resistance to maintain the fight that together, the people and the president will achieve the constitutional reforms and fall of the usurpers."

With the no-holds-barred repression unleashed by the coup regime and the increasing militancy and organization of the resistance—still adhering to principles of non-violence, to their credit—the political ground has once again shifted in Honduras. The terms of the San Jose Accords, hammered out by President Oscar Arias of Costa Rica and consistently rejected by the coup regime, have become clearly obsolete. The demand for a constitutional assembly has grown in breadth and volume throughout the country. The urgent tasks before the international community are to recognize that the crisis requires structural reforms and not patch-ups, to halt the human rights violations immediately, and to take all diplomatic steps toward the reinstatement of the constitutional government.

Posted by Laura Carlsen at 7:52 PM