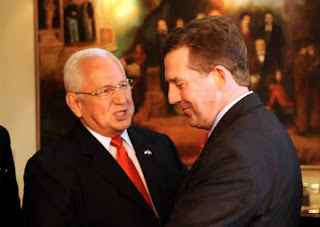 The good news is that Washington has finally begun to take stronger actions on Honduras.

The bad news is that the actions completely contradict each other, resulting in ambiguity, paralysis and infighting as the Honduran crisis explodes.

For many months, the news out of the U.S. capital focused on contradictions between multilateral resolutions to condemn the coup, the scarce but firm remarks from President Obama and fudging from the State Department. At the same time, the Pentagon kept true to its image of the strong-but-silent-type, not responding to confirm or deny accusations that its base at Palmerola played a role in the abduction of President Zelaya, that it invited the Armed Forces of the coup regime to participate in PANAMAX exercises last month, or that its military presence in Honduras was tacitly supporting the coup.

All these contradictions still exist. But now members of the U.S. Congress and private sector have made coherent policy even more unlikely by openly working to oppose the U.S. official position.

Congress Faces Off
A small minority group in the U.S. House and Senate is determined to support the Honduran coup regime despite official government policy to oppose it. In a showdown that reveals the depths of the division in Congress, conservative Senator Jim DeMint announced a plan to travel to Honduras with three fellow Republicans (U.S. Representatives Aaron Schock R-Illinois, Peter Roskam R-Illinois and Doug Lamborn R-Colorado). DeMint has been outspoken in saying that the military coup in Honduras is legal and constitutional, outright rejecting the UN and Organization of American States resolutions that the Obama administration voted to approve.

Head of the Foreign Relations Committee, Sen. John Kerry, refused to approve Committee financing for the trip. DeMint credits Senate minority leader, Mitch McConnell for getting around Kerry's refusal to fund his coup-tour by obtaining a plane from the Defense Department. He does not define this as a "fact-finding trip" as much of the press has falsely re-dubbed it. Instead, he explicitly announces the political bias of his publicly funded Honduran jaunt, writing on Twitter, "Leading delegation to Honduras tomorrow to support Nov. 29 elections. Hondurans should be able to choose their own future.”

The U.S. government, along with other governments in the hemisphere, has announced that it will not recognize the Nov. 29 Honduran elections if they are held under the military coup.

DeMint lashed out at Kerry's move, calling it "bullying." Kerry shot back that DeMint was blocking development of government Latin America policy.

But Kerry's office wasn't referring to DeMint's anti-democratic stance on Honduras. He was referring to the DeMint-led veto on key Obama diplomatic appointments to Latin America. Under Senate law, if a single senator objects to a nomination, the Senate must muster 60 votes to overcome the objection. The Democrats currently have only 59, counting independents. This means that DeMint can apparaently indefinitely block Obama's appointments to major posts in Latin American diplomacy. The region is the only one that still does not have a new under-secretary of state to coordinate policy, since the nominee, Arturo Valenzuela, has not been approved.

The second Congressional practitioner of renegade diplomacy is Ileana Ros-Lehtinen. The Florida Congresswoman is planning to visit Honduras in the coming weeks. It's pretty clear why Ros-Lehtinen goes out on a limb to defend the Honduran coup. Of Cuban descent, she's virulently anti-Castro and jumps on any opportunity to attack center-left governments in Latin America, particularly ones with ties to Venezuela.

Ros-Lehtinen describes her presumably public-funded trip with a bias that's inexplicit about its opposition to the official policy of the country she ostensibly represents: "I am traveling to Honduras to conduct my own assessment of the situation on the ground and the state of U.S. interests in light of the U.S.'s misguided Zelaya-focused approach," she stated.

The Congresswoman plans to meet with Micheletti, business leaders, the US Embassy and other members of the coup. She had a meeting scheduled with Honduran businessman Alfredo Facusse in Miami last week but Facusse, a supporter of the coup, had his visa revoked under the U.S. State Department measure to sanction the coup.

This would be but a last gasp of the fading ultra-conservative Florida Cuban group were it not for the fact that Ros-Lehtinen has power in Congress. Due to her seniority—she has been a member since 1989—she is currently a ranking member of the House Foreign Affairs Committee.

Fervent clashes in the Capitol are common on both domestic and foreign policy, but it is rare that Senators and Congressmen approach foreign governments (or coups) directly to negotiate positions contrary to their governments. A TPM blog notes that this is the new GOP strategy, not only in Honduras but in at least three other situations as well.

Alarmed at the counter-diplomacy efforts undertaken by the rightwing fringe, other members of Congress rallied today to express support for the administration's call for a return to constitutional order in the Central American nation. An Oct. 2 letter to the Honduran Congress by Congressional representatives Bill Delahunt, Jim McGovern, Janice Schakowsy, Sam Farr, Gregory Weeks and Xavier Becerra begins:

"We understand that you have received visitors from our Congress who represent the minority party, the Republican Party, who have expressed views that differ markedly from those of President Obama's administration and the Democratic majority party in the US Congress..."

It goes on to spell out the democratic position:

"We believe that the coup against President Zelaya was unconstitutional; the absence of a legitimate president, the violations of human rights and the curtailment of civil liberties are unacceptable; and these conditions make the holding of free and fair elections next November in Honduras impossible."

The letter follows similar letters from the office of Rep. Raul Grijalva.

It doesn't matter much whether Ros-Lehtinen and DeMint go to Honduras for the photo op with Micheletti or not. It has happened before (rightwing Congressman Connie Mack was there with a delegation on July 25 ) and had very little impact, except to delight the coup-controlled media for a day or so.

But it really does matter who pays. The U.S. taxpayer—whether through the Defense or State Departments or through Congressional funds—should not have to pay for congressional junkets that aim to undermine official government policies. The U.S. government has signed both the OAS and UN resolutions deeming the coup a coup and calling for non-recognition of the Micheletti regime.

Last Monday, we reported that the Honduran coup had contracted with the Washington PR firm Chlopak, Leonard, Schechter & Associates worth over $290,000. The contract was filed with the Justice Department on Sept. 18 and is available on-line. As noted in the Sept. 28 blog, this is the first time that the de facto regime has contracted directly, in this case signed by Rafael Pineda Ponce, head of Institutional Strengthening for the coup regime. It includes monitoring the press and coordinating responses to negative publicity.

The contract reads, "The registrant will engage in the following activities on behalf of the foreign principal: providing advice and planning on strategic public relations activities, designing and managing said activities through the use of media outreach, policymaker and third party contact and events and public dissemination of information to government officials, the staff of government officials, news media and non-government groups. The purpose of these activities is to advance the level of communication, awareness and media policymaker attention about the political situation in Honduras."
Honduran organizations have asked the State Department to investigate the legality of the contract. For one thing, the coup regime is spending Honduran public funds to sustain itself as an anti-constitutional government.

The Justice Department should also be concerned about violations of foreign lobbying regulations. It's one thing to lobby U.S. policymakers for a foreign government but quite another to lobby for a foreign military coup. By all logic, this should be prohibited under the lobbying rules.

This is another example of how the State Department's refusal to do its job by designating the Honduran coup a coup gives Micheletti wiggle room he never should have been given.

The ambivalence and contradictions coming out of Washington these days only serve to prolong and deepen the conflict in Honduras. It will never be possible to convince certain rightwing actors to accept a return to democracy in the country, not to talk slick PR firms into acting along any criteria but money coming in. The only solution is to diligently apply the law—something Hondurans no longer have the option of doing—to resolve this crisis. The coup must be isolated and sanctioned until its leaders realize that hijacking democracy is not acceptable practice.

Posted by Laura Carlsen at 6:46 PM